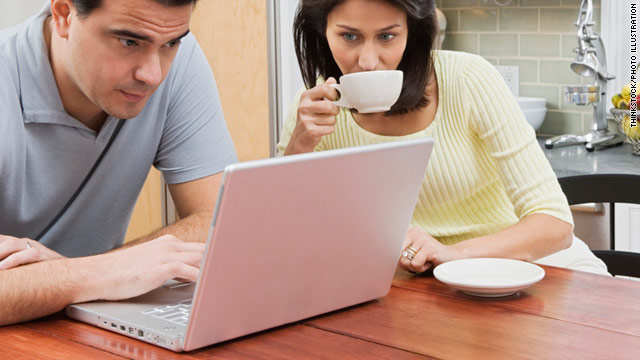 Yeah, it's fine to be Facebook friends with random classmates from high school, but exes who tear out your heart? No way.
STORY HIGHLIGHTS
RELATED TOPICS

(CNN) -- We see you out there, oh lovelorn ones, standing in the darkened night, lifting your hands to the heavens and asking the stars to deliver unto you answers -- to ease the anguished pattering of your heart.

Well, the stars ain't listening. But we are.

That's why this week, before that most sugar-spun monstrosities of commercial holidays, we've chosen to go all "Dear Abby" on you, picking three digital love-themed questions from our swooning readers to aim at like fat little Cupid with his bow.

So this girl breaks up with me a week after telling me she was falling in love with me (classy). She has a thing with another guy now (still classy), but she "still wants to be friends."

I can't stand seeing her name pop up on my Facebook feed, and oftentimes, I will find myself creepin' on her profile (Yes, yes, I know. Classy). Needless to say, I'm sick of it. But I said I would try to remain friends, and I feel the need to keep my word, because unlike her, I don't lie. Do I delete her as a friend?

Sorry to tell you this, Miserable, but this chick doesn't really want to be friends. She wants to have the digital reassurance -- right there in pixels and pings -- that you forgive her for lying to you and (it sounds like) cheating on you.

By keeping you as a Facebook friend, it's like telling the world and herself: "Hey, look, we're cool! We're friends! Facebook says so!" However, what serves as a Band-Aid to her is more of a festering wound to you.

A recent survey from lifestyle site YourTango.com shows that 48% of people look at their ex's social-networking profiles too often, a stat that led to the site instituting "Break Up With Your Ex Day," a call to cut your former swain out of your social networking life. We suggest you join the party.

Yeah, it's fine to be Fakebook friends with random classmates from high school, but an ex who tears out your heart and forces you to look at it, stomped-on and scar-tissued, every day in a dedicated newsfeed? Rip that Band-Aid off, my friend. It may hurt initially, but eventually that wound will heal faster.

I've been dating this guy for six months, and we're an official "couple," but it's not on Facebook. We'd initially established that it wasn't important, but now I kind of want that "In Relationship With" thing (cause dude's hot and I want my friends to be jealous, obviously). How the hell do I go about this? Just come at him with a relationship request? Get drunk on cheap Pinot Noir and tell him?

We're usually not down with the whole "virtual ties that bind"-ness of Facebook relationship statuses (changing one's Facebook status to "single" following a breakup is basically like flashing everyone you know -- it's embarrassing and everyone will want you to explain why you did it). But we understand the need to show-pony your dude around in front of your various and sundry "friends," especially those aforementioned randos from high school.

So here's the deal: If you're comfortable enough with the guy to introduce him to real life people as your "boyfriend," it shouldn't be a big deal if you ask him to make it known online. Just tell him what you told us: "You're hot, and I want to show you off." Flattery will get you everywhere.

To text or not to text?

I've been seeing this dude for three weeks now and we've gone on a few pretty good dates. We chat a little between hangouts -- mostly texts, GChats and Facebook comments -- but it's definitely not serious (at least not yet).

My question is: Do I have to tell him "Happy Valentine's Day" in some way? I mean, I know that sending him a pink teddy bear that says "I love you" and making reservations at a swank restaurant is insane, but would it be weird to text him or something?

What? Everyone loves presents! Send him the bear, make the reservations and e-mail him a link to Thoughtful, a startup that helps men choose gifts for women, so he won't buy you something stupid. Annnnnd we're kidding. That would be horrifying.

This is indeed a tough question -- if it were Christmas, Thanksgiving or any other unsexy holiday, we would say go for it, but sending someone a message on a day that (rather inanely) revolves around love is tricky.

You say the dude contacts you between dates? We would say take the temp of said messages and go from there. Are they along the lines of, "Your lips are like two luscious cherries, your skin akin to a sea of milky whipped cream topping the sundae that is your perfect form"? Well, then, sure, this bro isn't going to be turned off by a simple text message, although you might want to start running for the proverbial hills.

If your guy is more of a "Hey! Check out this super-slowed-down video of some horrifying child singing gibberish" kind of man, you might want to skip the sugar and converse as you normally would -- but maybe send him an especially hilarious "baby-lion-licking-a-dude" video to let him know you care.