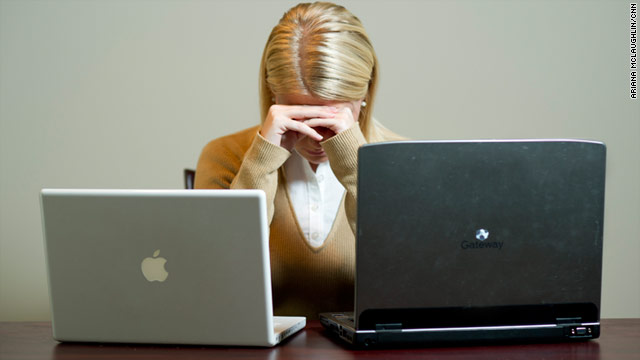 Say it with me, now. In 2011, I will not send an unspeakably rude e-mail to a co-worker.
STORY HIGHLIGHTS
RELATED TOPICS

(CNN) -- Ah, 2011. A new year and a prime time to make resolutions -- a word that stems from the Latin word resolutio, which roughly translates to "intense self-flagellation followed by structured reflection on the things you hate about yourself."

Allow us to aid you in this endeavor.

Now that you've finally finished reading dozens of surprisingly obnoxious top 10 lists, we're going to start the year off with a review of seven equally obnoxious netiquette faux pas to avoid in '11.

Think of it as a quick precis of all the dumb moves we tried to shake out of you in 2010 (research, after all, shows that refreshing your memory at spaced-out intervals is key to remembering stuff long-term).

No reverse-order countdown, though. After all, this isn't a moment of Joose-fueled chanting in Times Square.

1. ... send an unspeakably rude e-mail to one of my employees or co-workers.

"?!" alone does not an e-mail make. Forgetting your "pleases" and "thank yous"? Just as bad. Carpal tunnel syndrome be damned, make this the year you actually tap out respectful missives to those in your midst.

Quit squeezing lemon juice on your wounds. Apps like Avoidr and the Ex Blocker (which, yes, we inspired by sighing loudly and whining, "Why can't someone make my loser exes disappear?") make moving on ... well, not as easy as it was in pre-digital times, but fairly comparable.

Yes, Twitter can be a repository for banal thoughts and stomach-churning overshares. It can also be a useful tool for sharing links, connecting with online and real-life friends, and adding to the general conversation.

(Hey, don't laugh -- remember how the Library of Congress deemed this all archive-worthy? Five hundred years from now, they'll be like, "Whoa, those 2010-era plebeians were really into laser cats. That must mean something.")

Aim to give each tweet a bit of value: a tip, a crowdsource attempt, even a little zing to get your followers to :).

4. ... keep my wedding photo as my Facebook profile pic for five months or more.

That's really great that you got married. However, my congratulatory spirit wore out approximately 4.5 months ago. Time to go back to being a Person With a Personality instead of just a Bride, mmkay?

Actual responses and commentary are the lovely nerve network of Web 2.0. As for the trash: Yeah, instead of bothering with the noncontribution, we suggest you check out the billions of other things you could be browsing on the www this very minute. Problem: solved.

It's 2011, folks -- of course the coders who hand you such digital Tommy guns have figured out how to add safety latches. Apps like Mail Goggles and the social media sobriety test mitigate the damage.

If only you'd done some sober installing before your big NYE open bar, the decade might've begun on a much less sloppy, indelicate foot.

7. ... peck away at my smartphone during dinner.

Or brunch, or really any moment involving real-life interaction -- because it's incredibly impolite and likely detrimental to your ability to enjoy a tender interaction or a crisp walk through the park.

Look, if there's one addiction worth breaking this year, it's your clinically significant dependence on regular CrackBerry checks. Because let's face it, the whiskey binges and late-night Cheetos you swore off on 1/1/11 aren't going anywhere.