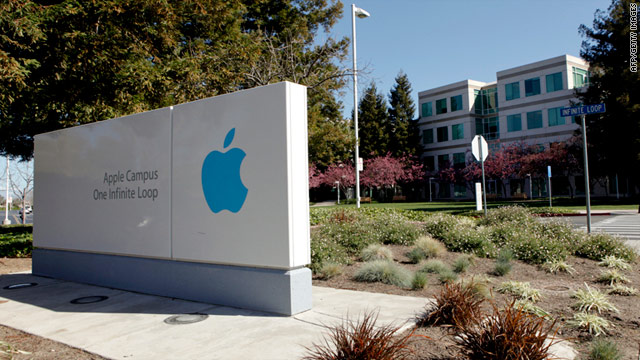 Apple investigators searched a man's home who they believed to have a lost device, police said.
STORY HIGHLIGHTS

They were reportedly looking for a prototype of the next iPhone that an Apple employee left in a bar in San Francisco's Mission neighborhood, according to CNET. Apple had contacted the police claiming the prototype is invaluable, the report says.

Four San Francisco Police officers escorted Apple investigators to a home in the city's Bernal Heights neighborhood, the statement said. The two Apple employees searched the home while the officers waited outside, police said. They did not find the item there and declined to file a police report, according to the statement.

A city police official declined to comment to CNN and referred reporters to the news release. Earlier this week, officials said they had no record of an investigation.

In the statement sent to CNN and other news media late Friday, police did not describe what "lost item" Apple was looking for. However, the file name of that news release is "iphone5.doc," as Reuters pointed out.

Lt. Troy Dangerfield gave an interview to SF Weekly Friday afternoon confirming the police's involvement with Apple in the investigation.

SF Weekly also interviewed a man who told the publication that he consented to having his home searched for a phone by six officers last month. No one in the group identified himself as being an Apple employee, the man told SF Weekly. He reportedly said that he assumed they were all police officials and would not have permitted entry if he knew the searchers were from Apple.

Apple's team searched the home, car and computer files, while police waited outside, the reports say. The investigators reportedly told the man that they had traced the phone's GPS signal to his house. When asked, he said he had been at the same bar where the phone was reportedly lost but that he didn't have it, the report says.

One of the investigators, who identified himself as Tony, gave the man living in the house a phone number and told him to call with any information about the lost phone, the report says. When the SF Weekly reporter called, a man named Anthony Colon, who said he was an Apple employee, answered, the report says.

Colon's LinkedIn profile, which he eventually removed, said he is a senior investigator for Apple and a former San Jose police sergeant.

The man, who reportedly said he's a U.S. citizen who lives with relatives, told SF Weekly that the people searching his home questioned his family's immigration status.

The man could not be reached by CNN for comment.

The situation is reminiscent of when an Apple engineer's prototype iPhone 4 was taken from a bar in Redwood City, also in the Bay Area, and sold to the blog Gizmodo, which published the first pictures of the device.

Last year, Apple worked with the Rapid Enforcement Allied Computer Team task force to search the homes of the man who allegedly sold the device and of Gizmodo editor Jason Chen.

REACT leader Michael Sterner said none of his officers were present at the home that was searched last month. He declined to comment further, citing a policy that prevents him from discussing investigations that are open or being handled by another department.

Apple has a history of working with REACT but apparently did not seek its services this time. The task force has struggled recently over budget constraints, prompting the organization to shut down an office and employ fewer officers, Sterner said.

Nor did Apple enlist the Federal Bureau of Investigation. An FBI spokesman said the cyber-program leader was not aware of such an investigation.

Last time, an Apple employee lost his phone at a German beer garden. This time, it happened on Saturday, July 23 at tequila bar Cava 22, said Jose Valle, the bar's manager and the owner's son. A man called two days in a row after that, asking anxiously whether Valle had found an iPhone, he said.

At Apple's expense, Cava 22 seemed to benefit from the news coverage. The bar drew an unusually large crowd Wednesday night after the news broke, Valle said.

CNET had been working with the police for two weeks, and officials failed to uncover any reports of a search, police spokesman Albie Esparza told CNN. Apple had not returned the official's phone call on Thursday, he said. In a message to Apple, the official told the company that he would refer reporters to its spokespeople if he did not receive a call.

Police spokespeople say they weren't briefed on the investigation, which involved Apple and the police, until Friday. The mixup may be attributed to Apple's unwillingness to file a formal report or with a lack of communication between the various police departments involved.

Police do not typically lie to reporters, even when discussing ongoing investigations, said Rebecca Lonergan, a former federal prosecutor who is now a professor at the University of Southern California's law school. However, in some cases, they are allowed to mislead suspects, she said.