'Dead' HP tablet comes back to life with help of hackers, deal-seekers 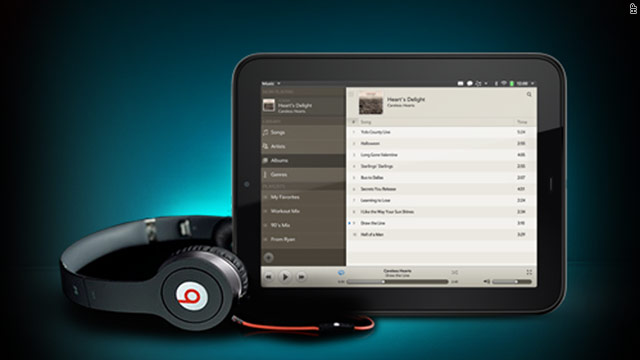 After struggling, a huge price slash made the HP TouchPad one of the most sought-after tablets.
STORY HIGHLIGHTS
RELATED TOPICS

Nearly two weeks after Hewlett-Packard announced that it was discontinuing mobile devices and dramatically slashed the price of the TouchPad, customers are hunting them with renewed zeal.

The tablet has sold out, according to the company. Meanwhile, HP is considering making more of the devices -- and continuing to support them, despite the fact that independent developers are working to hack the tablets to run on Google's Android operating system, instead of the now-killed webOS.

"We have been surprised by the enthusiastic response to the TouchPad price drop, and we understand that many customers were disappointed that HP and our retail partners ran out of supply so fast," HP spokesman Mark Budgell wrote in a blog post Monday.

Like virtually every other device in its class, the HP TouchPad failed to make much of a dent in the iPad-dominated tablet market when it was released early last month.

But after HP announced August 18 that it was discontinuing mobile devices, remaining TouchPad inventory was slashed to fire-sale prices: $99 for a 16-gigabyte model and $149 for a model with 32 gigabytes of storage.

The device, which had originally sold for about $400 more, all of a sudden became one of the most sought-after item in the gadget world.

Via Twitter, Budgell let potential customers know Monday that there's no official word when, or if, HP will be making more TouchPads.

He said there would be more information "in the next few days" on whether more of the tablets will become available.

But in an e-mail Monday, a spokeswoman described TouchPads as "temporarily out of stock."

For gadget lovers, the discounted TouchPad is a tradeoff. The assumption has been that the discontinued device won't get software updates, there will be no new apps created for it, and webOS, the operating system created by Palm and purchased by HP, will essentially become a dead platform.

But for many, a device that got largely positive reviews and was selling for $400 less than the iPad was a powerful temptation to jump into the still-emerging world of tablet computing.

"The bottom line is that the TouchPad, right now, is worth $99. Even if it never sees another ounce of code added to it, a gadget whose software soul is forever frozen in August 2011," wrote Matt Buchanan, a gadget reviewer at tech site Gizmodo. "The TouchPad is the second best tablet you can buy, at any pricepoint. It nailed all the big ideas about what a tablet should feel like".

And things could get even better.

In an e-mail Monday, an HP spokeswoman seemed to keep the door open to supporting the machine in response to the massive interest.

"We expect that HP TouchPad owners can look forward to an over-the-air update that will enhance the platform and add functionality and a growing applications catalog," the spokeswoman said. "We plan to continue to investigate the best ways to leverage webOS software and grow the applications."

HP never released sales figures for the TouchPad and declined to do so in the e-mail. But quick discounts in July suggested poor sales, and at least one report from AllThingsD said retailer Best Buy sold only 25,000 of the 275,000 TouchPads it ordered.

Meanwhile, outside developers are trying to keep the TouchPad vital in their own way. The website Hack N Mod is offering a reward for anyone who can prove they've modified the tablet to let it efficiently run Google's Android operating system.

That would mean the "discontinued" tablet would all of a sudden be able to run updated software and continue to have new apps available even if webOS dies out.

By Monday, an Android "mod group" had released a video purporting to have succeeded. Wired reported that the team, CyanogenMod, said that the hack was relatively easy and that the hard part has been actually getting their hands on a TouchPad.

Which is the main trouble that potential customers still face.

On the blog post, Budgell addressed a concern many have expressed since the fire sale began: that people are scooping up dozens of the tablet at a time to turn around and sell them at a profit.

Some early customers have reported having orders confirmed by third-party retailers at or near the $99 or $149 price point, only to have that order canceled.

"If more inventory is available in the future, there will be an order limit," Budgell wrote.