Tech to keep you safe from hurricanes 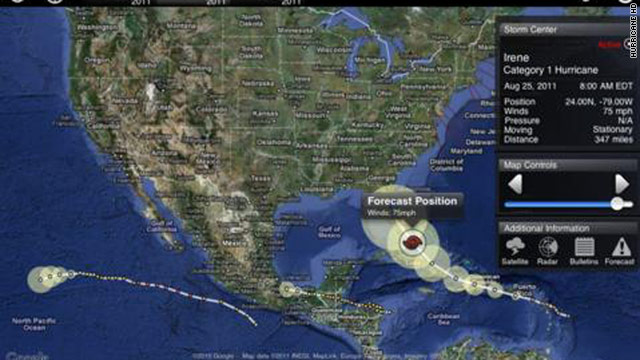 Hurricane HD, for the iPad, is one of several mobile apps designed to help track storms.
STORY HIGHLIGHTS
RELATED TOPICS

Here are a few of them, including suggestions for how to stay plugged in if weather knocks out power in your area.

HurricaneHD provides exclusive video, blog posts from weather experts and other tools for folks watching Irene and other future storms.

It has a tracking map that can display multiple storms at the same time, sends active storm bulletins and contains an archive of information about past hurricanes.

It can also use GPS to tell you how far away you are from various points of a nearing storm.

Both the Android and Apple versions feature animated radar, video, local forecasts and the ability to upload photos and videos of local weather.

Based on Google Maps, Hurricane Hound tracks storms in the Atlantic and east Pacific, as well as passing along National Weather Service advisories and warnings.

StormPulse is a website that uses date from the National Hurricane Center, cloud imagery from the NERC Satellite Station and basic imagery from NASA.

Users can click back and forth to show radar, cloud cover, watches and warnings and other features on a real-time map.

In the face of emergency situations, the fast-paced, minute-by-minute updates you can get from Twitter are handy. Whether you're a Twitter user or not, you can pull up and read individual feeds as long as you have Web access.

The ocean service from NOAA, the federal government's science agency for oceans and coasts, has a Twitter feed to follow.

Of course, we're also inclined to suggest you follow CNN's huge team of folks following the storm. Here is a curated list of Twitter accounts for the CNN team dedicated to Irene.

Assuming mobile networks are up and running, folks in areas hit by a storm like Irene could be affected anyway by persisting power outages.

To stay plugged-in, it will be important to have a power source to recharge your mobile devices that doesn't depend on plugging into the wall or desktop.

The gadget reviewers at CNET are fans of the Solio Universal and CPS Cellboost chargers. Battery companies like Energizer offer multiple chargers, and the store where you bought your phone (or tablet) very likely sells batter-powered or solar chargers from the phone-maker or a third party.

The Axis is a multi-purpose device sanctioned by the American Red Cross. In addition to a USB charger for mobile phones and other devices, the $70, hand-crank-powered device has an AM/FM/NOAA radio and flashlight.

Think of it as the techie Swiss Army Knife for power-out disasters.

A couple of things to keep in mind: solar chargers will need sunlight, so will probably be more useful in the aftermath of a storm than during the heart of it.

And, obviously, battery-powered models are most handy with a backup supply of dry batteries.

Know any tools we've missed? Feel free to share them in the comments, or send us a message on the @cnntech Twitter feed.