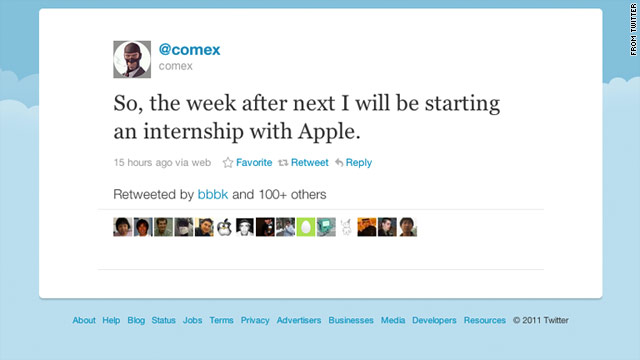 (CNN) -- A 19-year-old who is probably the world's most noted iPhone hacker said Thursday he's been hired by Apple, the very company whose products he's been hacking into.

"It's been really, really fun, but it's also been a while and I've been getting bored," Nicholas Allegra, who's better known by his pseudonym Comex, posted on Twitter. "So, the week after next I will be starting an internship with Apple."

Apple did not immediately respond to a CNN request for comment on Comex's internship at the company.

In the story, he noted that Comex was looking for an internship, and he suggested that Apple give him one.

"Now it has," he wrote Friday.

Comex started the website jailbreakme, which lets iPhone users jailbreak their phones simply by visiting that site. A jailbroken iPhone can run apps that are not approved by Apple for sale in its App Store.

The phones also can then be "unlocked," which makes it possible to use them on wireless networks that Apple hasn't approved. International travelers like that feature.

Other Apple hackers have praised the site as being incredibly sophisticated. Dino Dai Zovi told Forbes that Comex's work is as impressive as Stuxnet, a computer worm that apparently targeted Iran's nuclear facilities last year.

It's fairly common -- more so than you might expect, at least -- for big tech companies to hire once-nefarious hackers. These coding gurus are sometimes better versed in the security vulnerabilities of a company's products than anyone else in the industry.

And, these companies hope, the former hackers could use these skills to make their products safer.

The blog MacRumors says Apple has made similar hires in the past:

"Earlier this year MobileNotifier developer Peter Hajas was picked up as an Apple summer intern."

VentureBeat, however, says that's a new phenomenon for the world's largest tech company:

"Hiring hackers isn't new in the tech world, but it's a fairly recent development for Apple, which has usually tried to squash hackers by more traditional means."

"George Hotz, one of the first iPhone hackers, was sued by Sony after reverse engineering the PlayStation 3, a move that set off a wave of user anger at the company, resulting in more than 20 retaliatory hacking attacks by the hacker collective Anonymous and others."

But he argues the Comex hire may be good for Apple:

"Apple, by taking the carrot instead of stick approach, has saved itself that massive PR headache. And by hiring someone who actually understands its products' security weaknesses, it may just be making its users safer, too."