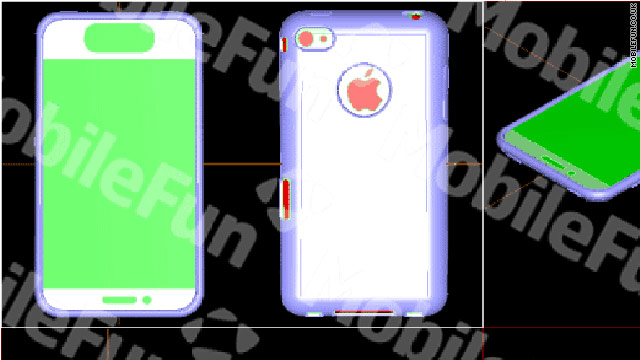 Are these designs for cases to hold the next iPhone? A British tech blog says they appear to be.
STORY HIGHLIGHTS
RELATED TOPICS

(CNN) -- Another week, another round of iPhone 5 rumors. This time, it's an apparent case for the unreleased phone that has Apple fans buzzing.

Mobile Fun, a British mobile-phone blog, has posted images of what it says is the design for a next-generation iPhone case leaked "from a Chinese case manufacturer."

The case, and an image the blog says was later sent to them by another manufacturer, suggest what they call "massive changes" to the iPhone 5, or whatever it will be called.

Among them: what appears to be a larger, roughly 4-inch display screen, a curved rear panel more like earlier iPhones than the iPhone 4, and a hole on the back -- about where the Apple logo is on current phones. Some Apple observers speculate that hole indicates a possible new location for the device's antenna, replacing the iPhone 4's much maligned side antenna.

"If these images are authentic -- and we have every reason to believe that they are -- then the iPhone 5 is a radical evolution of the iPhone concept, and a bigger departure from the iPhone 4 than previous case images have shown," the blog post reads.

But MacRumors, a popular blog focused on, well, what its name says, isn't convinced.

Based on multiple reports, all of them from unnamed sources due to Apple's loose-lips-sink-ships policy on details about upcoming products, the next version of the iPhone will be announced in September.

The China Times pinpoints the iPhone 5 release to the second week of September with an initial order of 4 million units, MacRumors said.

A better camera, a faster processor, a bigger screen -- all have been mentioned repeatedly in rumors that inevitably swirl every time a new Apple product is in the works.

And there's obviously an audience for every one of these speculative tidbits.

A recent survey of about 3,000 consumers showed that 35 percent of them plan to buy Apple's next phone when it hits the market -- despite not knowing anything about it yet.