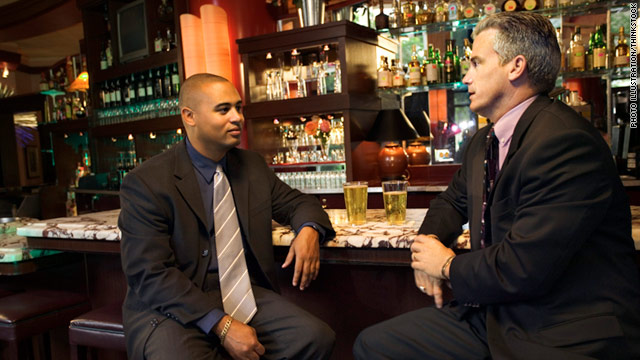 If you're bad at networking, try an app that helps those who need a little greasing to get socially fluid.
STORY HIGHLIGHTS
RELATED TOPICS

Yes, the Web is a haven for the socially awkward. But we've got good news for those of you who habitually consort with corners at social functions and have a penny loafer permanently lodged in your mouth: That very same Internet is chock-full of tools designed to help you out in the real world as well.

In the past, such people were forced to resort to copious amounts of alcohol and/or therapy (always a wonderful combination) to get through basic social exchanges, but thanks to the many and varied wonders of the Web -- in all of its portable iterations -- they now can fake some fairly convincing social competence.

If you are among that huddled mass of shoe-gazers and heavy sighers, read on -- unless, you know, you're otherwise engaged with one of the Internet's other uses. In which case, er, see you in a few.

If you're remiss at casting a net when networking...

We see you there, professional person at a networking event, clutching the edge of the bar like a child at her first recital clinging to the lip of the piano. The condensation from your whiskey glass is dampening your hand, making you worry that should someone clasp your fingers in a handshake, they would think you're an unusually sweaty person.

Oh, great, now you really are sweating. Yup, you should probably just go home and resign yourself to the fact that you will never get ahead, and that the world is not, in fact, your oyster -- it's just an empty shell.

Before you go all Sylvia Plath on us, you might want to check out Sonar, an iPhone app that launched in May to help those of us who need a little greasing to get socially fluid. Basically, the app connects to several of your social networks (Foursquare, Twitter and Facebook), so that when you check into a location, you can see all the people there, as well as what mutual friends you have on the Book of Faces and "That Twittering Thing."

Then, when you scan the room, you won't see a sea of faces waiting to judge you, but friends of friends (or at least acquaintances). From there, you can introduce yourself with confidence as "John's friend," or "Mary's co-worker." We would, however, avoid: "We both follow Yanni on Twitter!" That's awkward for everyone involved.

If your opening lines frequently get crossed...

Bars are changeable beasts. One night, the dance floor is littered with beautiful specimens, the evening's denouement involving you and one of its denizens making out in the mists of the requisite fog machine.

The next, the drinking hole in question is empty, save for one dude in a deep V-neck T-shirt held together with safety pins, drawling on and on about how "Vegas is the most culturally rich city in the world."

Enter SceneTap, an upcoming iPhone app that will tell you -- in real time -- how many people are at a bar, what the girl-to-guy ratio is, and the age range. The app will also include forums in which barhoppers can rate establishments and converse directly with the bar itself about the scene, as well as get info about deals.

Rather creepily, the app will garner age and gender data via cameras in a selection of registered bars, but, hey, Facebook is already using facial recognition to auto-tag snaps, so you might as well just submit to your voyeuristic, digital overlords already.

While you're waiting for SceneTap to hit the, well, scene, you can check out Assisted Serendipity, a Foursquare plugin that alerts you when the guy-to-girl ratio at your drinking spot of choice has adjusted to your favor. Or you could just leave it up to fate. Sadly, however, there's no app for that.

You're not a sharp-dressed wo/man...

Your entire closet is residing among your tangled bedsheets and you're close to rending cloth like a man in mourning. You have 15 minutes to get ready, and you can't attend this event naked -- it's not that kind of party. What's a body to do?

Well, if the garments littering your king aren't all sweatpants and T-shirts from local eateries ("I Got Crabs at Marco's Shack!"), might we suggest crowdsourcing your look? Go Try It On is a website and iPhone app that lets you gather real-time feedback about what's gracing your body. Just upload a snap and let the masses -- or a private group of friends -- decide if you're fit to go outside.

And if you are of the sweatpants and novelty T persuasion (and don't currently work as a stand-up comic) there's always Hendricks Park, a Skype-powered personal shopping service.

Basically, you pay a fashion consultant -- one who you'll never have to meet in person -- to send you clothing. No leaving the house required. Still, we do suggest firing up one of the aforementioned apps after receiving your bounty of vestments -- or you'll just be one well-dressed agoraphobe.