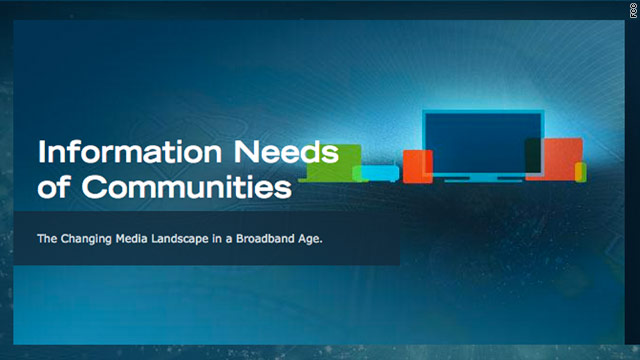 The goal of the report was to help ensure that we all have access to vibrant, diverse sources of news and informationn.
STORY HIGHLIGHTS
RELATED TOPICS

(CNN) -- If you want to learn what's wrong -- and right -- about the current U.S. media landscape, then Thursday's FCC report is a good place to start.

However, this report's nearly 500 pages are conspicuously light on specific recommendations for how media policy might fix glaring problems or capitalize on new opportunities in ways that would benefit American communities.

This report, Information Needs of Communities, is the outcome of the FCC's Future of Media project, which launched in January 2010 amid considerable fanfare.

But judging by this report, the U.S. government doesn't intend to play much of a role in ensuring such access -- despite the fact that the report concludes:

"With the media landscape shifting as fast as it has been, some current regulations are out of sync with the information needs of communities and the fluid nature of modern local media markets."

Some of the specific FCC policy changes that this report did recommend are:

Simplify and reduce TV stations' disclosure requirements for the kind of programming they air ("enhanced disclosure," introduced in 2008).

Require disclosure of "pay for play," when "broadcasters (enter) into agreements with sponsors to run news stories promoting the sponsors' products or services." In recent years, the FCC has noted several cases of this practice, where the agreements were not disclosed on air. The FCC is not calling to ban this pay for play, however.

Terminate FCC's localism proceeding, which since 2003 has sought to ensure the radio and TV broadcasters are accountable to their communities for providing local programming, as well as expanding low-power FM radio.

Repeal the remnants of the Fairness Doctrine still on the books. Introduced in 1949, but largely dismantled by the Reagan Administration, this policy required licensed broadcasters to present controversial issues of public importance -- in an honest, equitable and balanced way (at least in the eyes of the FCC). Many broadcasters and others complained that, rather than foster debate and a diversity of viewpoints, this policy created a chilling effect and impinged on First Amendment free speech rights.

For instance, regarding localism, Copps wrote:

"The report does recognize problems in the generation of local news and information and the lack of accountability journalism... But instead of calling for stepped-up Commission action, it tinkers around the edges, for example urging philanthropies to find better ways to do their business, asking Congress to change the tax code, and suggesting that government direct more of its advertising to local media.

"Then, rather stunningly I thought, the report recommends shutting down our pending localism proceeding. I remarked after the localism proposed rulemaking came out that some of its proposals could and should be modified before they became final rules.

"This could be quickly and easily accomplished and it makes more sense than walking away from a huge and still relevant record. ...The policy prescriptions here, as elsewhere in the report, don't follow from the diagnosis."

Elsewhere, the report observed that the Internet has made the news landscape more vibrant. In particular, this has led to an explosion of independent hyperlocal online news startups. (Block by Block published a roundup of what the FCC report had to say about hyperlocal news.)

But there's a tradeoff.

According to the FCC: "An abundance of media outlets does not necessarily translate into an abundance of reporting. In many communities, there are now more outlets, but less local accountability reporting. Where there are gaps, less quality local reporting can lead to less government accountability, worse schools, wasted taxpayer dollars, greater corruption and other problems."

Meanwhile "legacy" news organizations, especially newspapers and TV stations, still are going strong -- despite the loss of nearly 13,400 U.S. newsroom jobs in the past four years. According to the report, they've emerged as the largest providers of local news online.

To compile this report, the FCC gathered and analyzed responses from a wide range of people and organizations to a long, complex list of questions about the media landscape.

The report was expected to be published on February 1, but it didn't materialize until the FCC quietly changed the project's name from "Future of Media" to "Information Needs of Communities."

The rebranding really isn't surprising, since the FCC effort was inspired by the John S. and James L. Knight Foundation's Commission on the Information Needs of Communities in a Democracy, which in 2009 issued its own detailed report -- including specific policy recommendations for government.

Knight Foundation President Alberto Ibargüen noted about the FCC report: "Of the areas considered by the Knight Commission, our nation has made real progress on only one: universal broadband access. As satisfying as that is, it is also completely unacceptable -- and un-American -- that a significant number of people are still 'second-class citizens,' without the broadband access needed to participate in digital life and commerce."

(Disclosure: I also write for the Knight Digital Media Center at the University of Southern California, where in 2010 I wrote a series of articles expanding upon the Knight Commission report.)