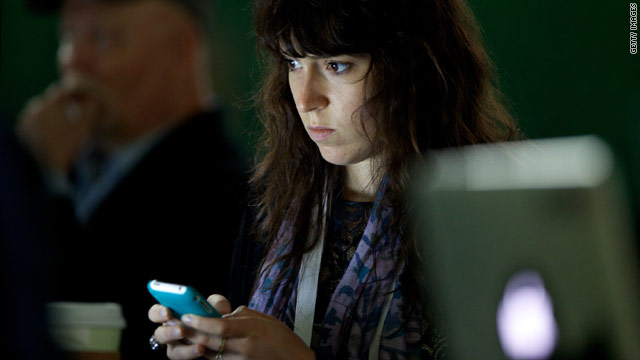 (CNN) -- Call Kimberly Brown a smartphone junkie if you want.

"I'm sure everyone around me will say I'm most definitely addicted," said Brown, an archaeologist at The Gibraltar Museum in Gibraltar, and self-described gadget freak. "I feel I use it to its full potential -- as music player, as camera, for texts, for e-mails, for surfing ... apps, games."

But there's one way Brown says she never uses her phone: As a phone.

"There are so many ways of keeping in constant touch with people that voice calls are almost too invasive now," she said, adding she can't remember the last time she used her iPhone 4 to make a voice call.

Experts say phone users like Brown are part of a growing trend. As more people have grown adept at text-based messaging, and more own smartphones that can send messages via text, e-mail, Facebook or Twitter, voice chatting is becoming something of an afterthought.

This cultural shift has taken on new relevance in the wake of Tuesday's World Health Organization's finding that radiation from mobile phones can possibly increase the risk of cancer. Scientists have focused on the potential risk of brain cancer when phones are held against the user's ear.

How much radiation does your phone emit?

Many mobile-phone manufacturers advise customers to keep the phone at least a fraction of an inch away from their body when it's transmitting data. Obviously, that's easier when you're texting than when you're talking.

For many people, a text or mobile Facebook message is seen as less intrusive than a phone call, which asks the recipient to interrupt what they're doing and answer.

Ross Gagnon, a telecommunications researcher at J.D. Power and Associates, said his company's research shows voice calling on mobile devices mostly flat or dipping, while other uses are on the rise.

In a recent survey, respondents said they'd made or received 21 calls or voicemails in the past 48 hours (a number likely inflated, Gagnon said, because many respondents used their mobile phones for work).

By comparison, they'd sent and received 55 texts, checked e-mail 15 times and browsed the Web another 10 times during that time. That's 80 "interactions," or roughly quadruple the number of voice-based ones.

"It kind of goes up and down, but in general, obviously a lot of calls are being replaced by texts," Gagnon said.

According to the CTIA, the wireless-industry trade group, the number of text messages sent every month has skyrocketed: from about 10 billion in 2005 to nearly 188 billion last year.

In 2009, the amount of data exchanged in texts and other wireless activity in the United States surpassed the amount used on voice calls, according to CTIA.

For folks wanting to bypass traditional phone calls, more Web-based options are emerging. And users are taking advantage of them.

After years of modest use, nearly one-fourth of all American adults who use the Internet now say they have made a Web-based phone call, according to the survey by the Pew Internet and American Life Project. That's up from 8% four years ago.

The numbers clearly chronicle a shift in behavior. But Gagnon noted that part of that shift, at least in the case of some users, may be as much perception as reality.

"People are using their phones more in general," he said. "While you may think you're making fewer calls, it's more ingrained in you (than newer communication methods). In some cases, you probably make almost the same number of calls -- it's just that you're doing these other things (texting, etc.) even more."

It's obviously an open question as to whether the WHO's finding will push more users away from mobile-phone chatting. (Listing phones as "possibly" contributing to cancer puts them on a list with more than 266 other items, from lead to talcum powder).

But for some, it's a moot point. A post to the @cnntech Twitter account Wednesday asked followers about mobile-phone habits. A flood of responses (admittedly from a nonscientific and tech-savvy crowd) came from followers who say they chat on their phones rarely, if at all.

"Ph...phone? What's that?" said Twitter user Kate Burn of Maine in response. "I thought these were just texting and Twitter machines."