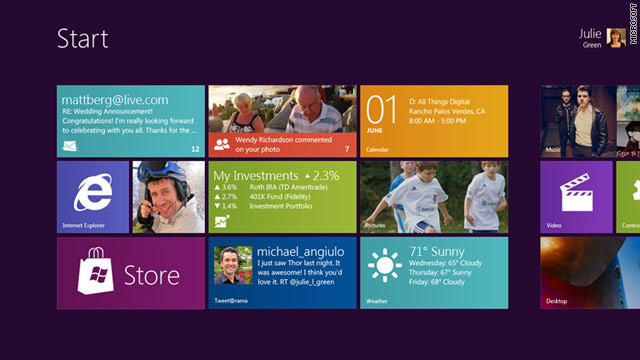 Windows 8 will have a look familiar for those who have used Microsoft's Windows Phone 7.
STORY HIGHLIGHTS
RELATED TOPICS

Rancho Palos Verdes, California (CNN) -- The next version of Windows will look a lot like Windows Phone 7. But the familiar PC design is still there under the hood.

Microsoft unveiled the design for Windows 8 at the All Things Digital conference here on Wednesday. The software giant plans to provide a more extensive demonstration at a conference for application developers in September.

Windows 8, which may not be the final name for the operating system, won't be available in stores this fall, as optimists had predicted, said Steven Sinofsky, the Windows division president. Analysts expect it to be released next year.

The vast majority of PCs sold run Windows, but the tablet market currently belongs to Apple. Microsoft put a large focus on tablets during the Windows 8 presentation.

Microsoft has been taking stabs at tablet PCs over the last decade. The company failed at its attempts to effectively adapt the Windows desktop, Start menu and all, to touchscreens.

In a grand concession, Microsoft is now borrowing a page from Apple's iOS and Google's Android. Windows 8 takes the colorful tiles and finger-swipe gestures from the Windows Phone operating system and expands them to a larger screen -- in this demo, 10.6 inches diagonally.

Like a smartphone, the system lights up to a "lock screen," which has some alerts and diagnostic information set atop a background picture. Once inside, small squares represent each app containing snippets of information.

A finger swipe on the right side of the screen opens a menu of buttons for functions like search, sharing and a shortcut to the home screen. Swiping on the left side switches between open apps.

Microsoft will ask developers to write software tailored to the new look. But the system will also run older Windows programs. They open to a screen that resembles the classic desktop, but windows can be dragged with a finger. 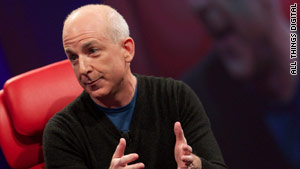 Steven Sinofsky, Microsoft's head of Windows, gave a demonstration of the next version on Wednesday.

Sinofsky, the Windows head, stressed the importance of not abandoning the established and reliable technologies from the PC era.

"A mouse has a precision that your finger can't approach," he said. "The mouse and the keyboard are just tools. They're not evil in and of themselves."

Nokia CEO Stephen Elop, who took the stage after the Microsoft folks, entertained the idea of building a Windows tablet. Thanks to a recent partnership, Nokia has "a very unique relationship with Microsoft," and Windows 8 looks "beautiful," Elop said.

Microsoft comes into tablets as the underdog. The modern tablet war is already a year old, and new entrants are marching.

BlackBerry maker Research in Motion is targeting businesses with its PlayBook, and Hewlett-Packard plans to install its webOS software on the computers, printers, phones and tablets it makes. HP may also license webOS to other hardware manufacturers, HP CEO Leo Apotheker said here on Wednesday.

Windows 8 is still in development, so it's unclear how well the system will run on tablets. The demo was silky smooth, but the touchscreen Microsoft used was connected to a hidden desktop computer, rather than contained within the portable hardware.

Microsoft says Windows 8 will be able to run on processors designed by ARM Holdings, in addition to Intel chips. That's an important addition because ARM's technology is winning among most smartphone and tablet makers. ARM President Tudor Brown predicted on Monday that his chips will be used in at least half of all mobile devices sold, which includes laptops.