Consumer Reports: White iPhone no bigger than black one 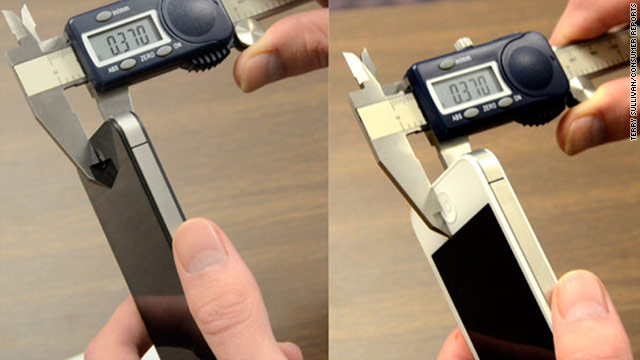 Consumer Reports says the white iPhone 4 it tested is the same thickness as the black model.
STORY HIGHLIGHTS
RELATED TOPICS

San Francisco (CNN) -- OK, this is getting ridiculous. Just about everything Apple does lately is ripe for drama, it seems.

The latest dispute involves the thickness of the white iPhone 4, which hit stores last week.

Several recent independent reports stated the white version is about 2 millimeters thicker than the black model that's been out since last summer.

But Consumer Reports said Monday that it measured the sizes of white and black models and found no difference.

"When we compared a white iPhone 4 with a black iPhone 4 in our Yonkers, NY, lab using high-quality calipers, we found they were both the same thickness (0.37 inches)," according to Consumer Reports' site. The product-testing organization also said that cases made for the black iPhone 4 fit the white model just fine.

This corresponds with a statement by Philip Schiller, Apple's chief marketing executive, who reportedly responded to a person via a private message on Twitter by saying the white iPhone 4 "is not thicker."

Schiller was also reacting to tech-news websites, including Engadget, iLounge and TiPb, which claimed their tests found white iPhone 4s to be thicker than black ones.

The latter website measured the phones from six angles to make sure it wasn't an optical illusion, Rene Ritchie, the managing editor for TiPb, wrote on Twitter. (Black is often said to be slimming, after all.) Perhaps Apple's factories churned out slightly different batches, Ritchie speculated.

CNN compared a black iPhone 4 with two white ones on Friday, and there appeared to be no size discrepancies among them. One of the white models tested was on display at Apple's flagship store here, and another was purchased by a source through Apple's business retail unit.

The white iPhone 4 had been delayed 10 months due to design and manufacturing complications. Apple executives have said the white version required significant retooling to properly tune the device's sensors to its glass shell.