Gasp! White iPhone 4 is thicker than black one 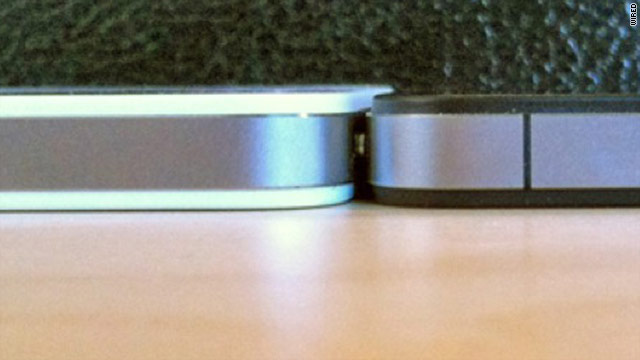 (CNN) -- In the tech world, a fraction of a millimeter is enough space to to start an iPhone conversation.

A day after the long-awaited white iPhone 4 hit stores, Web chatter was focused on the fact that it appears to be a shade thicker than the 10-month-old black model. (Wired.com measures the difference at a whopping 0.2 millimeters).

So, what's the big deal? For most people, the answer is: "Nothing."

But for some current (or, now, former) black iPhone owners, some models of tight-fitting, precision cases won't fit on their new phone. Relatively big cases should be fine.

To many observers, this is just further evidence that no detail about Apple gadgets is too trivial to go unreported.

(Add that to the ever-so-slightly different placement of the mute switch on the Verizon iPhone and you're creating the need for a veritable cornucopia of different iPhone cases. Sort of.)

The leading theory on the white phone's gain in girth is that extra coating was needed to keep light out of the phone so the camera would work. The aluminum antenna band around the phone's edge is no thicker than the black iPhone's, just the painted glass casing.

Apple vice president Phil Schiller suggested as much, saying that the white coloring interfered with the iPhone's proximity sensors.

Maybe this'll be a short-lived issue anyway. The next iPhone (either the iPhone 5 or a permutation of the iPhone 4, similar to the 3GS) should be out by the end of the year