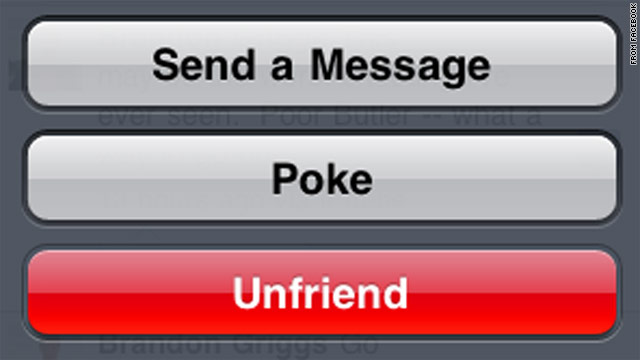 (CNN) -- Anxious to reject some of your digital friends while on the go?

Facbeook's update to its iPhone app, released Monday, makes this easier by adding a new feature that lets people "unfriend" each other.

Previously, Facebook only allowed users to cull their friend lists from the Web, meaning most people did this task from home instead of from phones.

"Amazing update. Now i can unfriend!!!" one user posted on iTunes, in a review under the heading "yes yay woohoo."

While bloggers have picked out the "unfriend" feature as the one that's most fun to talk about, and make fun of, most commenters on Facebook's page on Tuesday were discussing other features of the updated app.

Among the other changes:

Event check-ins: Facebook's app already let people share their locations with friends, but not it's easier than before to "check in" to a particular event, like a friend's birthday party of a concert.

Friend map: Now you can see where you Facebook friends are -- on a map. This assumes your friends are using the app to check in to various locations. Facebook doesn't broadcast your location unless you tell it to.

"Based on a brief trial run, the updated app works as advertised and even feels slightly speedier than before -- though that could just be my imagination."

Not everyone got that impression, however. One Facebook commenter wrote:

"Much slower.. nothing works... everything keeps 'loading' someone just took a good thing, and ruined it!"

CNET says the check-in map is a "useful embellishment:

"Just click a friend's name in the Activity view of your Places list and you'll see a thumbnail that plots the location of his or her latest check-in on a Google Map. Tap the map to expand it to full-screen size."

TechCrunch likes the update but wonders what's next:

"So, the next question: when is this functionality coming to Android? Facebook wouldn't give a specific date when we talked to them a few weeks ago. This continues the trend of Android playing second fiddle to the iPhone in terms of functionality."

And, while we're talking about the future, the app update has again inspired complaints about the fact that Facebook doesn't have an iPad-specific app.