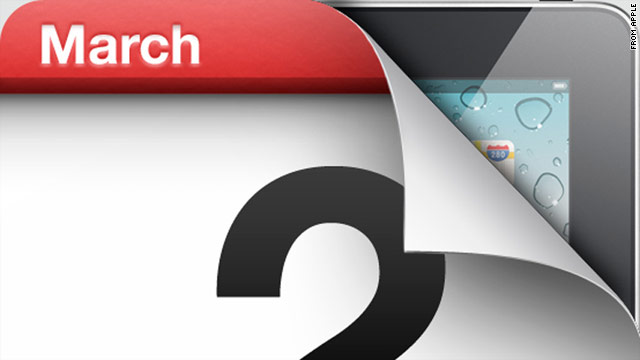 Apple is expected to announce a new version of the popular iPad on March 2.
STORY HIGHLIGHTS
RELATED TOPICS

(CNN) -- It's pretty much official: After months of anticipation, Apple on Wednesday sent out invitations to a March 2 press event where the company is expected to unveil the new version of its iPad tablet computer.

The invite, e-mailed to members of the news media at about 11 a.m. ET, features a picture of an iPad-shaped device with a giant "2" in the center, seemingly a sly reference to the date of the San Francisco event and also to the device's rumored name: "iPad 2."

Apple, the world's highest valued tech company, became the first in the field to debut a modern, touch-screen tablet computer when it unveiled the iPad in January 2010. Since then, a host of competitors, many working with Google's Android operating system, have emerged to compete with the popular iPad.

No one knows exactly what the new tablet from Apple will look like, or what it will be called, but bloggers expect the second-generation device to feature a front-facing camera, for making video calls. That's something many iPad competitors, including the Motorola Xoom and Samsung Galaxy Tab, have going for them that the iPad currently doesn't.