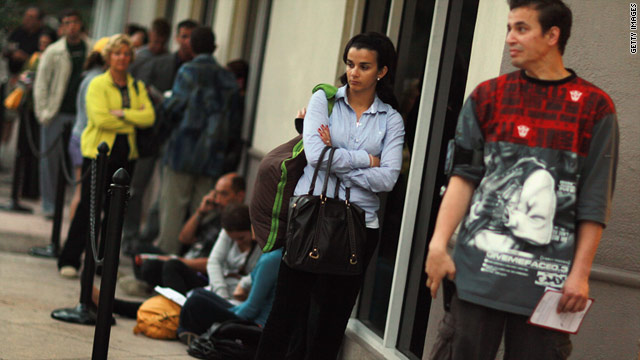 Fifteen minutes before the phone went on sale, eight people were in line at Apple's flagship store in New York, according to CNNMoney. Down the street, about a dozen people waited in line at a Verizon Wireless store.

And in Atlanta, Georgia, slightly more than a dozen stood in line outside a Verizon store to get the new phone. One of them, Lena Hill, 22, brought food and blankets at 6:15 a.m., expecting to have to camp out in a line to get the device. There wasn't a line, so Hill just waited in her car.

In San Francisco, there were no shoppers lined up early Thursday at an Apple store downtown, and only a small line at a nearby Verizon store.

By contrast, thousands have lined up for the release of previous Apple products, including the initial launch of the iPhone 4 in June. In the past, many shoppers have even slept outside all night to ensure being among the first to get a new Apple gadget.

The Verizon iPhone's hardware is similar to the existing iPhone -- the big difference being that it works on Verizon's network instead of AT&T, which has had exclusive rights as the iPhone's wireless carrier since 2007.

The new iPhone went on sale at 7 a.m. Thursday at Verizon and Apple stores, at Best Buy and on the retailer's websites. With a two-year contract, it retails for $199 for the 16GB model and $299 for the 32GB model.

iReport: Are you getting a Verizon iPhone?

Customers were able to pre-order the Verizon iPhone last week, and analysts estimate between 250,000 and 1 million of the phones were sold on pre-order, making it among the biggest phone debuts on the Verizon network.

Pre-orders for the phone sold out within a day, according to Mashable. The phone became available again available for internet purchase Wednesday.

Customers have been calling for Apple to offer the iPhone on networks other than AT&T for years, in part because that network is known for dropped calls.

Consumer Reports surveys consistently rank AT&T below competitors in terms of customer satisfaction. Larger cities, such as New York and San Francisco, have experienced particular problems with dropped calls and a lack of mobile broadband service on AT&T, to a certain degree because so many data-heavy iPhone users contributed to jamming the network.

Alex Ricker, a 28-year-old who bought a Verizon iPhone in Atlanta, said she waited on an upgrade for eight months to get the iPhone on Verizon and never would have considered switching to AT&T to get the phone.

"I looked at all the other smartphones and they just -- they were really bulky and quite expensive, and I felt like waiting," she said.

Bob Nadolski, 45, said his daughter begged him to switch his family's cell phone plan from Verizon to AT&T so she could get an iPhone.

"I personally have not had great voice service through AT&T" on a work account, he said. "Where we live, Verizon has better coverage, so I would never switch the family plan to AT&T."

Nadolski bought his daughter the Verizon iPhone on Thursday and said she had been waiting "very patiently" for the phone.

Switching carriers to get an iPhone isn't easy.

First, owners of a current iPhone can't simply switch from AT&T to Verizon. They'll need to buy a new phone. And that's on top of early-termination fees of up to $325 they'll have to pay to break their current contract.

Some were still willing to make the leap.

Lauren Asther, 19, told CNNMoney she was switching to Verizon for the iPhone. "I have the AT&T phone, and it kept dropping calls," she said.

The cold weather may have contributed to smaller-than-usual lines.

"Apple clearly was expecting more of a crowd this morning," CNET wrote on a live blog from New York. "As I mentioned earlier, the Apple staff way out-numbered actual Verizon iPhone 4 customers. I guess we finally have the answer to the question: What will keep people from standing in line for a new iPhone on launch day? It looks like 20-degree temperatures."