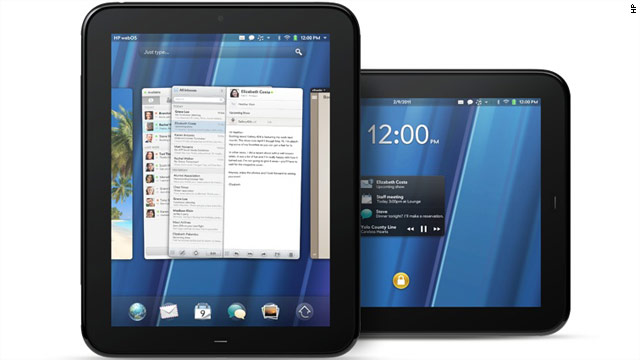 A Wi-Fi-only version of HP's TouchPad will go on sale this summer in the U.S., with 3G and 4G versions to follow.
STORY HIGHLIGHTS
RELATED TOPICS

San Francisco (CNN) -- Hewlett-Packard showed the fruits of its acquisition of Palm on Wednesday.

The technology giant demonstrated a new tablet device and two new smartphones, as well as disclosing plans to bring its webOS software to computers and printers.

All three gadgets run a new version of webOS, the software that Palm began developing five years ago. HP is designing these products to work wirelessly together.

Here's what HP unveiled at its press event:

The tablet, called TouchPad, looks similar to Motorola's Xoom or Apple's iPad. It has a shiny black case and 9.7-inch touchscreen, and it weighs 1.6 pounds, which is about the same as Apple's iPad.

But unlike tablets from competing hardware makers, HP uses its own operating system, called webOS. HP highlighted what it said were several advantages over the market-share-leading iPad.

The feature looks much like the one in the upcoming PlayBook tablet from Research in Motion, maker of the BlackBerry. Google's Android and iPad also have their own takes on multitasking.

"This is true multitasking," said Sachin Kansal, a webOS director. "Multitasking was not an afterthought. It was a key design principle from Day One. And it shows."

Unlike the iPad, the TouchPad can also play Adobe Flash movies, the most popular video format on the Web. The PlayBook and tablets running Android will also be able to play Flash clips.

The TouchPad is equipped for video conferencing. HP says it's working with Skype and other software makers to enable the webOS-gadget owners to easily talk to each other.

The Wi-Fi-only version of the TouchPad will go on sale this summer in the U.S. Tablets with 3G and 4G cellular connectivity will follow.

Like RIM, HP is also appealing to businesses with its new tablet.

"TouchPad is more than just a pretty face," Rubinstein said. "It's a powerful work tool, too."

The Pre3, a new version of Palm's original webOS phone, has a 3.6-inch touchscreen, which is barely larger than an iPhone's. It also has a slide-out physical keyboard, good for e-mail addicts.

Rubinstein called the Pre3 "a smartphone for professionals who want the power and productivity without giving up their personal passions."

"Finally, a phone you can use for business that you don't want to leave at work," he said.

In this arena, HP will go head to head with Apple. The iPhone maker is also trying to get its products in the hands of business customers and has been gaining some ground on market leader RIM.

Like the TouchPad, the Pre3 is scheduled to launch this summer.

HP also showed a consumer-oriented phone called the Veer. The tiny gizmo has a 2.6-inch touchscreen and slide-out keyboard that's "about the size of a credit card," HP says.

"Never has a smartphone done so much and felt so little," Rubinstein said. The Veer will be available in "early spring," he said.

All of these mobile devices can be charged using the Touchstone, an innovative docking station that powers batteries using a process called induction. When placed on the surface, a device can also switch into "exhibition mode": a new feature that can turn a gadget into a digital picture frame or display apps built especially for that mode.

Application information can be traded between devices using a feature called "Touch-to-share." The wireless connectivity also extends to synchronizing things such as text messages to the tablet when your phone is across the room.

This has become a common focus for many tech giants. Apple has had success in coaxing customers into buying Apple products exclusively because of how they work together using software such as AirPlay and iTunes. Google's event last week was about synchronizing data between Android devices.

HP didn't name cell carrier partners, exact release dates or pricing for any of the products. The presentation also failed to address key concerns such as how long the batteries on these devices would last, though the company says they're "high-capacity."

Palm, a pioneer of touchscreen hand-held computing, previously released five smartphones running webOS. Those Pre and Pixi devices were well received by critics but largely ignored by consumers. Based on Wednesday's presentation, HP appears to be retiring the Palm brand.

"Today marks an important new beginning. You might say, as part of HP, we're now presenting from a much larger stage," Rubinstein said. With a parent company that can offer enough resources, he said, Palm can "drive rapid scale and diversification for webOS."

Computers and printers with webOS

In addition to these new mobile-oriented products, HP ended the event with a bombshell.

HP, the world's largest personal computer maker, plans to build laptop and desktop computers that rely on webOS. The company's other huge business, printers, will also get an injection of the touch-friendly system.

Details were scarce, but a PC giant developing machines with its own proprietary operating system instead of Microsoft's Windows could have major implications.

Windows systems, and PCs in general, are not the dominant forces in computing that they once were. Smartphones recently overtook PCs in units shipped, according to a report from research firm IDC.

"HP is delivering on the enormous promise of webOS," said Steven McArthur, an HP executive responsible for applications and services. "These fantastic new products are just the start for HP's plan to build the largest install base of connected users in the world."