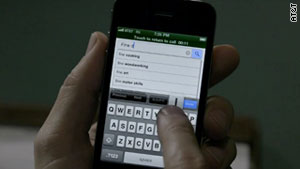 (CNN) -- A complicated love triangle is playing out on television.

This one isn't taking place on soap operas, but instead in commercials from AT&T and Verizon Wireless about Apple's iPhone.

AT&T will begin running a new ad on national TV during prime time Friday night, a spokesman said. The commercial shows a businessman using an iPhone and touts the ability to be on a call and search the Web simultaneously.

The company has posted the ad to YouTube, a video it's calling Answer.

This comes in response to the upcoming release of Verizon's iPhone 4 on Thursday. Some analysts say the largest U.S. network partnering with Apple could lure many defectors from AT&T, which was previously the exclusive carrier for the iPhone.

In interviews and on commercials, AT&T is defending the loss of iPhone exclusivity by boasting of competitive advantages, including talk-and-surf and international use. Apple and AT&T have previously run commercials focused on the former feature.

Verizon Wireless has already begun running ad campaigns to promote the new phone. The company began accepting preorders from current customers Thursday, and those supplies have already been exhausted.

The most recent ad features Verizon's glasses-wearing mascot answering an iPhone, saying, "Yes, I can hear you now." It's an overt play on criticisms of AT&T's network.

Meanwhile, Apple, ever the cordial and promiscuous lover, is running a commercial called Waltz, which shows the two carriers' phones side by side doing the same tasks. Apple's conclusion: "Two is better than one."