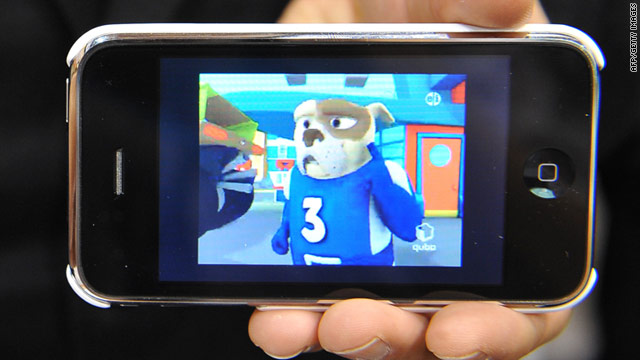 (CNN) -- According to a new Cisco forecast, in just four years two-thirds of the world's mobile data traffic will be video.

How will wireless carriers keep up with this demand? The major providers are pinning their hopes on 4G wireless networks, which they say will be able to handle greater data loads.

Will consumers end up paying much more for mobile video? Probably.

Smartphones, laptops, and tablets are expected to drive nearly 90% of mobile traffic by 2015. In particular, "mobile-connected tablets will generate more traffic in 2015 than the entire global mobile network in 2010."

Another factor that will contribute to this growth, which Cisco overlooked: More and more feature phones (non-smartphones) will be operating on faster wireless networks. The new LTE network from MetroPCS is already handling traffic from some feature phones, such as the Samsung Craft.

What's driving this growth? Faster mobile access. According to Cisco, the average mobile network connection speed doubled from 2009 to 2010 -- and a tenfold increase is expected by 2015.

Cisco also predicts that within four years there will be a mobile device connected to a wireless network -- not counting Wi-Fi connections -- for nearly every person on the planet.

"Today, the average mobile connection generates 65 megabytes of traffic per month -- which is equivalent to about 15 MP3 music files," the forecast says. "By 2015, the average mobile connection is anticipated to generate more than 17 times that amount, to a total 1,118 megabytes of traffic per month -- equal to about 260 MP3 music files."

Doug Webster, Cisco's senior director of worldwide service-provider marketing, told Fierce Wireless, "The lines between fixed and mobile will converge, and the trends we're seeing on the fixed will be seen on mobile."

In the U.S., however, there will probably be one key difference between fixed and mobile internet access: consumer protections and costs.

The FCC's new "net neutrality" rules, passed in December, exempt wireless carriers from most requirements. This leaves the door open for U.S. wireless carriers to charge customers extra for access to certain kinds of content and services, such as YouTube, which are available for free over fixed connections.

Furthermore, as VentureBeat explains, the new rules mean that "wireless companies are free to stop some smartphone users from taking advantage of their data plans by throttling download and upload speeds."

This could be a key concern for consumers as wireless network congestion mounts in the coming years.

Already, two U.S. carriers (Metro PCS and Verizon) are suing the FCC over the requirements the new rules impose on them. This week, the FCC filed motions to dismiss these lawsuits.

Digital Trends observes, "Humorously, it was Verizon and Google's net neutrality proposal that appears to have formed the basis for the recently passed FCC regulation."

According to Cisco, in 2010, total mobile data traffic, including video, grew by 159% -- more than three times faster than internet traffic traveling over wired ("fixed") communications. Earlier, Cisco predicted that growth would be 149%, so this trend is moving faster than expected.