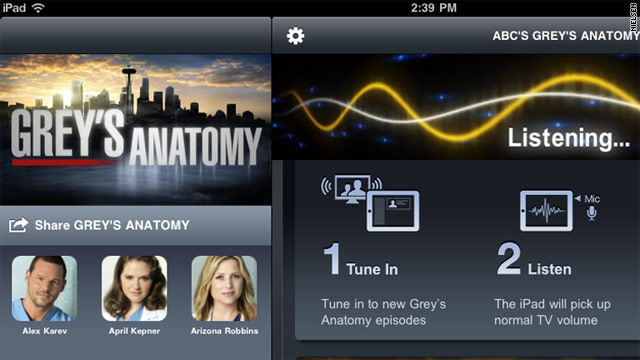 (CNN) -- Fans of "Grey's Anatomy" will get a second screen on which to enjoy the medical drama starting this week.

ABC and Nielsen, the company best known for its TV ratings system, have teamed up to create what they're calling an immersive, interactive app for Apple's iPad that will let fans view behind the scenes video, take quizzes and keep up with show-related chat on sites like Facebook and Twitter.

The app, available in Apple's online store as of Tuesday, is the first of what Nielsen hopes will be several designed to enhance hit shows from various networks. Thursday's episode will be the first that is accompanied by content from the app.

It's the latest effort by developers trying to capitalize on the growing number of television viewers who are using "second screens" like mobile phones and tablet computers while they watch.

"We know that our viewers are already engaging in second-screen behavior when they're viewing their favorite shows," said Sid Gorham, executive vice president of Strategy and New-Business Development at Nielsen. "We said, 'How do we use the second-screen experience to make the first screen more compelling?' "

Versions for Android devices and the iPhone are in the works, Gorham said.

It also lets users fictitiously "check in," a la Foursquare, at locations from the show and share the check-in with their friends.

Gorham said "Grey's Anatomy," a hit show for ABC for nearly six years, was a perfect choice to roll out the app.

"It's obviously got a huge audience, but it's also a young and affluent and very social-networking-aware audience," he said. " 'Grey's' has a huge Facebook fan following and has all the right demographics to overlap with the tablet demographic."

ABC and Nielsen hope that will add up to more luck than they had the first time they tried to team up.

In September, the two announced plans for a similar app for the show "My Generation." Unfortunately for everyone involved, the new show was canceled two episodes into its run.

The "Grey's Anatomy" app relies on Media-Synch, which is new technology that Nielsen uses to judge how many households are watching a show. The iPad reads audio from the show and triggers certain actions within the app based on the sound.

Watch a video demo of the "Grey's Anatomy" synch app

That allows people who watch the show later via DVR or some other means to have the same experience as those who watch it when it originally airs.

Now in its seventh season, "Grey's Anatomy" won a 2007 Golden Globe Award for best drama series and has been nominated for multiple Emmys.