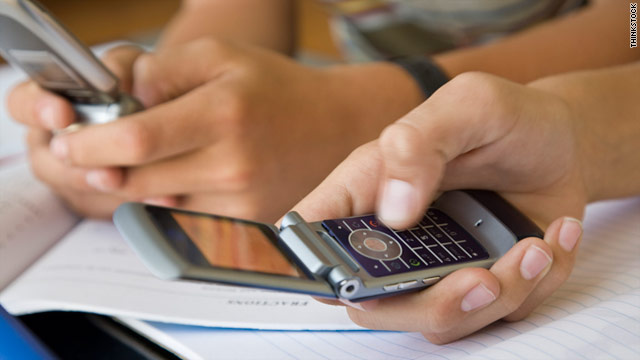 The majority of mobile users around the world still don't use smartphones, tablets or other advanced mobile devices.
STORY HIGHLIGHTS
RELATED TOPICS

(CNN) -- People who write -- and read -- tech news often forget or dismiss the fact that the vast majority of mobile users in the United States (70 to 75%) and around the world (up to 95%) still don't use smartphones, tablets or other advanced mobile devices.

(Traditionally, smartphones have been defined as phones that run third-party software (i.e. apps) and operate on more advanced operating systems. Feature phones are simpler, although recent changes are making the two types of phones more similar.)

So last week's announcement of the new Facebook app for feature phones was a much-needed high-profile reminder that feature phones matter -- and that they probably will continue to play a powerful role in the mobile landscape for several years to come.

It's also an indication that, in terms of what users can do with their phones, the line between feature phones and smartphones has been blurring for some time. From the perspective of most mobile users, this difference may be becoming less important or meaningful.

The new Facebook app is built to work on the Snaptu Java-enabled feature phone app platform, which serves as an app library for feature phones. When feature phone users install the free Snaptu software on their phone, they gain access to many apps.

In addition to Facebook, there also are Snaptu apps for Twitter, Picasa, an RSS reader, ESPN Cricket sports news and AccuWeather -- plus many more apps via Snaptu's own "Snappstore."

Snaptu isn't the only player in this market. Getjar is another popular provider of Java-enabled feature phone apps. And there are others, including Qualcomm's platform The BREW. Generally (but not always), carriers push or require specific feature phone app platforms; but some can be purchased and run on any phone with any carrier.

The new Facebook feature phone app currently is offered only outside the United States, through mobile carriers that have agreed to not charge customers for data used by this app, at least for a while.

This is a clear -- and smart -- move by Facebook to grow its audience in the developing world, where mobile phones (especially feature phones) are by far the most common way for people to access the internet.

In the U.S., you can access a lean version of Facebook's mobile site, m.facebook.com, from most feature phones -- but data charges may apply, depending on your carrier and plan.

None of this is new or surprising, of course, unless you regularly read the vast majority of mainstream tech news intended for a U.S. consumer audience.

That's my point. I have no doubt that many readers of CNN Tech and similar venues are wondering, "Who cares about feature phones?" Wireless carriers, that's who. Oh -- and up to three-fourths of current U.S. mobile users. And Facebook (no slouch).

Then why aren't we seeing more mainstream tech news prominently covering feature phone developments? This is a pretty huge media blind spot. True, many feature phone handsets are more or less commodities, not very remarkable as hardware. But what people can do with these devices is evolving fast.

Last March, GigaOm noted that when it comes to apps, feature phones are the new black:

"Network operators have historically displayed an abundance of greed and a staggering lack of vision when it comes to mobile applications, which is why carrier-branded offerings have stagnated while the wave of new app stores takes flight," they wrote.

"But the operators are certainly showing a renewed interest in bringing more advanced offerings to the feature phone users that represent the overwhelming majority of their subscribers. And that's good news not just for consumers but for all the players who are part of the booming mobile app ecosystem."

In the big picture, turning a blind eye toward the technology choices of the majority of mobile users is unlikely to spur the most useful and constructive innovation. That's why the current myopic hyperfocus on smartphones and tablets is starting to feel a bit like steering from the side-view mirrors.

I suspect that in the coming decade, the most innovative and influential mobile developments will embrace devices all across the mobile technology spectrum. Also, ventures that continue to focus solely on the highest-end devices may start losing ground.

There will always be a low end of mobile tech, and it will always matter. Facebook and Twitter -- as well as Nokia, LG, Samsung, and many other players -- rightly recognize this as a big long-term opportunity.