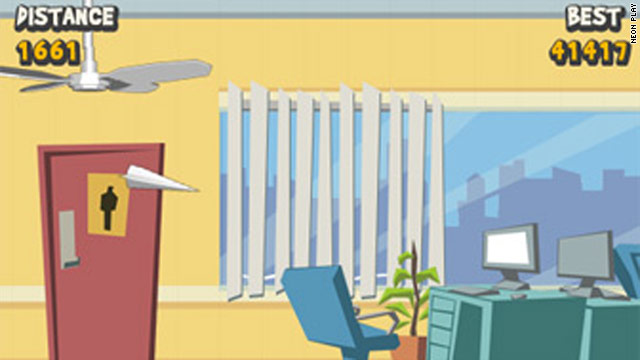 (CNN) -- Apple's countdown to 10 billion downloads in its App Store hit its long-awaited milestone this weekend.

The lucky customer, who gets $10,000 worth of virtual cash for the download, responded to the news by hanging up the phone on Apple when the company called to congratulate her.

"I thought it was a prank call," Gail Davis of Orpington, Kent, UK, told Apple fan site Cult of Mac. "I said, 'Thank you very much, I'm not interested' and I hung up."

Turns out, one of Davis's daughters had downloaded the winning app -- "Paper Glider," a game that simulates building paper airplanes and flinging them around an office.

Apple announced the milestone on Saturday.

"With more than 10 billion apps downloaded in just two and a half years -- a staggering seven billion apps in the last year alone -- the App Store has surpassed our wildest dreams," said Apple marketing vice president Philip Schiller. "The App Store has revolutionized how software is created, distributed, discovered and sold."

After talking to her daughters, Davis said she realized the call, from iTunes vice president Eddy Cue, was for real. She tried calling Apple back, to no avail, but got a call from one of Cue's colleagues a couple of hours later.

"The girls were getting quite tense," she told Cult of Mac. "They never would have forgiven me. They would have held it against me for all eternity.

"If it had been Steve Jobs [calling] I definitely would have thought it was a wind up."

Davis told Cult of Mac her girls download apps for their iPod Touches. She and her husband have iPod Nanos, she said, but not models that run apps. She said that might change soon.