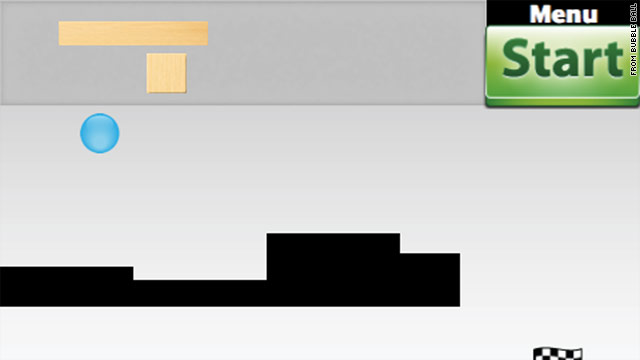 Bubble Ball beat out a version of Angry Birds as the top free app in the Apple App Store.
STORY HIGHLIGHTS

(CNN) -- Perhaps, in the age of hoodie-clad tech CEOs like Mark Zuckerberg, we shouldn't be surprised that the creator of the most popular free app on iTunes is only 14 years old.

His name is Robert Nay, and he's an 8th grader in Spanish Fork, Utah.

But the media is fascinated by this story. In part because Nay is so young. Partly because he used a public library to do some of the work (hello, quaint factor). And, here's perhaps the most lasting piece of this, because he used a program that's designed to make app-building easy for anyone -- even non-programmers.

Then there's the fact that his app, Bubble Ball, is so freakishly popular. According to the All Things Digital blog, Nay's app -- a series of puzzles where players have to guide a ball through courses that they manipulate -- was downloaded a million times in its first two weeks.

The app debuted on December 29, the blog says, and hit the top of the iTunes chart late last week, beating out a holiday-themed version of "Angry Birds," which is the king of all the time-waster games. (The paid version of "Angry Birds", which is the one most people will know, is still on top of the paid app chart at the Apple App Store, which serves iOS devices like the iPod).

In an interview with ABC News, Nay looked like a middle schooler's version of dapper. Video clips showed him pulling books off of library shelves while wearing a blue button-up and jeans (it's an outfit Zuckerberg may want to make note of, after his slouchy fashion sense earnedhim a worst-dressed rating from Esquire magazine). He talks with that Zuckerbergian, code-is-my-first-language type of rhythm.

But, for Nay, these coding skills are new and basic. He used a program called Corona, from Ansca Mobile, to develop the app. This is part of a recent trend: Google also unveiled an app-development tool, called App Inventor, which it says will be used in middle school and high school classrooms.

The gist, proponents say, is that apps now can be developed by anyone -- just like Blogger and Tumblr let anyone author a blog, even without knowledge of the HTML coding language.

"With Corona, you can quickly create applications in a matter of hours. No Objective-C/Cocoa required, and no C++."

"Although it's his first game, Nay has been into computers for some time, including Web programming and helping others with their computers. When he's not at the computer (or school) he also likes reading, especially science fiction, and playing the piano and trumpet.

"Some months back, a friend suggested that if Nay liked his iPod Touch so much, perhaps he should try his hand at programming for it. At first he tried the standard Objective-C programming tools, but found the learning curve a little steep. He tried another tool called GameSalad, but didn't like the results. In the end, he settled on the Corona tools from Ansca Mobile. Corona was easy to use, he said, and also let him write once and publish for both Apple and Android devices."

ABC echoes the fact that he struggled with the process until he found the Corona tool:

"Robert said he enjoyed creating the game, which was somewhat inspired by features of his own favorite iPod games, but it wasn't always smooth sailing. 'There were some times when I felt like, 'can people seriously do this?' It seemed impossible,' he said. 'But then there were times when things just worked and I'd be like 'maybe I can actually do this.'"

Google's App Inventor software has been compared to stacking Legos. It doesn't require coding knowledge. Corona -- check out its video demo here -- looks more complicated, and All Things Digital writes that Nay did author 4,000 lines of code to create Bubble Ball. So this isn't child's play.

That blog says Nay's mother helped her son by doing the "grown-up stuff" -- putting the app on iTunes, promoting it and drawing some of the layouts for Bubble Ball's levels. Her son did all the code, All Things Digital says.

ABC writes that Nay is being coy about his future as a developer:

"Aside from excelling at school, Robert plays the piano, mandolin and trumpet. But given the response to 'Bubble Ball,' he said he's going to be carving out more of his time to work on his next application. Robert said he'll likely charge people for his next download, but is learning quickly to be tight-lipped about his plans. When asked about his newest game, he told 'Good Morning America Weekend' just this: 'It's secret for now.'"

Meanwhile, the app is getting good reviews on iTunes, with an average rating of three stars out of five.

Some reviewers note that Nay's story factored into their decision to download Bubble Ball: "This game is pointless and stupid!!! Sooo glad I didn't pay money for this!! Only reason it has that many downloads is because a 14 year old kid made it," wrote one reviewer called Epicmetal.

Others didn't mention the 14-year-old at all, perhaps because the app's description does not advertise Nay or his youth.

"Some people might skip this because of the 'homemade' look of the graphics, but that would be a big mistake! It's not complicated, it's easy to get into, and best of all, it's a lot of fun!" wrote a reviewer listed as Jay Jennings. "Worth the download, for sure!"