To reduce wireless bills, some try an 'iPod phone' 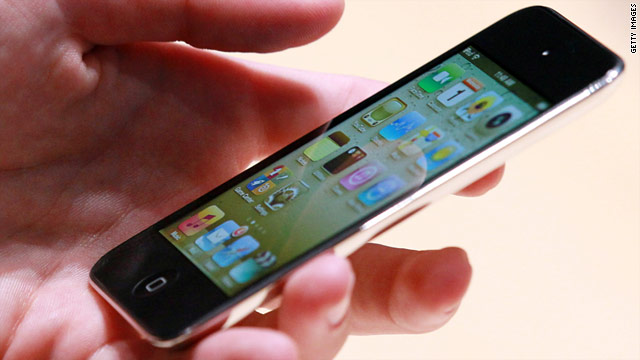 Some tech-savvy people are finding ways to use Apple's iPod Touch as an inexpensive substitute for a smartphone.
STORY HIGHLIGHTS
RELATED TOPICS

(CNN) -- Brennan Stehling's phone looks just like an iPhone, but his bill is nothing like the ones most smartphone customers get in the mail each month.

His costs $40, but it can dip as low as $30 on months when he uses the phone sparingly.

The Milwaukee, Wisconsin, man's Apple device isn't a phone, exactly. It's an iPod Touch, a touch-screen gadget that contains most of the features of an iPhone except for the earpiece and cellular chip.

Use of the iPod Touch as a makeshift smartphone is an endeavor reserved mostly for a small niche of enterprising techies. Many of them share phone-related strategies, usually involving use of Skype or Google Voice, on internet message boards.

These resourceful iPod Touch owners make calls via speakerphone or with a Bluetooth or wired headset. When home, at the office or sipping coffee at Starbucks, Stehling uses a Skype app to make calls that are crystal clear over a Wi-Fi internet connection. They are better-sounding than on most cell transmissions, he says.

When he ventures out on the street, Stehling carries a MiFi to stay connected.

A MiFi is a credit card-sized gizmo that can connect to a cellular network and translate that signal into Wi-Fi. That allows your iPod, laptop and other gadgets to get online anywhere you can get cell reception.

His device from Virgin Mobile hooks into Sprint Nextel's 3G online network and broadcasts a Wi-Fi signal so that as many as five nearby gadgets can connect.

"My iPod Touch gets notifications, so I see the incoming messages immediately," Stehling wrote in an e-mail to CNN. "It's pretty easy to stay in touch."

Stehling likes this setup because it's inexpensive and helps him avoid the two-year contracts favored by most wireless carriers. He gets most of the benefits of a smartphone for a fraction of the cost.

But this arrangement may not be for everyone. Here are some of its pros and cons.

iPod Touch owners wanting to turn it into a phone will need to pay $150 for a MiFi device, plus $40 per month for unlimited usage. But compare that with AT&T's $65 plan for minimal voice minutes, no text messages and two gigabytes of data. (Cutting data to the bare minimum can reduce that monthly cost to as low as $55.)

iPhone owners can no longer get unlimited internet access because AT&T did away with that offering last year. If you want to share your AT&T connection with a computer like you can with the MiFi, you must add $20 to your plan.

Verizon Wireless hasn't said whether it will offer an unlimited plan for the iPhone 4, or how much those subscriptions will cost when the new phone goes on sale February 10. But the prices of the carrier's other smartphone bills are comparable to AT&T's.

Verizon also offers a MiFi, which means that some adventurous people were using an Apple phone-like device on Verizon even before the announcement of the new iPhone. The MiFi 2200 costs more than Virgin's up front, but if you don't mind contracts, you can get it for $70 with a one-year commitment or free with a two-year.

Cell carriers typically lock in customers, especially those buying smartphones, for two years with legal agreements, which are costly to break and help subsidize the price of the phone. The cost of the iPhone after subsidies versus an iPod Touch is similar.

But avoiding contracts is an especially attractive proposition for early adopters who feel compelled to have the latest tech toy. And that's exactly the type of person that's testing the waters with this "iPod phone."

For one, MiFis and data-only plans don't come with phone numbers. So someone going this route generally pays Skype about $6 a month to get a phone number to attach to a Skype account.

Dialing out to other phones is an extra fee, though that can be avoided using Google's free Voice service.

The iPod Touch also lacks a text-messaging application. But Google Voice comes to the rescue again. There also is plenty of free software in Apple's App Store that mimic text-messaging functions; they're designed for excessive texters looking to dodge telecom fees.

"I prefer to have people reach me via Twitter direct messages and Facebook messages," said Stehling about his text-communication methods.

Another major obstacle is the MiFi's battery life. Wi-Fi sharing, by nature, uses a great deal of energy, even on phones. The dedicated MiFi devices can run out of juice after just two or three hours. So even though the iPod Touch's battery can last for much longer, you'll lose that portable internet connection.

Stehling resorted to juggling wall and car chargers and multiple batteries to make the situation work. As a failsafe backup, the Web-design and app-development contractor also keeps an iPhone 3G around, though he rarely uses it.

For these reasons, this method may have trouble reaching any sort of critical mass.

The weak battery life on MiFis is one major stopping point, Redman said. Also, most MiFis available now are for 3G networks, at a time when phone makers are moving toward 4G.

Verizon says it will have two 4G MiFi devices by midyear, and that could help adoption of this method. But it will take three years for Verizon's 4G service to be available everywhere that its 3G coverage is now.

"The Virgin Mobile MiFi has decent speeds, but I am looking forward to 4G speeds with the MiFi devices that support it," Stehling said -- that is, "once I have the option in my area."

Stehling and others are blazing a trail that might take a long time to carve and perfect. He believes 10 or 20 years might go by before usage and costs of wireless data exceed that of voice -- the opposite of how the system works now.

But Stehling predicts it will happen eventually.

The cell phone of tomorrow?

If some major barriers can be conquered, the potential market for a cheaper cell plan is huge.

Apple sold about 10 million iPod Touch units in the past three months, a 27% increase compared with the same period in 2009. In addition to music and movie playback, many use these devices for online games, basic Web surfing and FaceTime calling over Wi-Fi.

The smartphone market is by no means threatened. Apple sold more than 16 million iPhones during that same three-month period. Smartphones make up more than a quarter of the U.S. cell phone market, according to a November Nielsen report.

But if smartphone subscription prices edge too high, the search for alternative methods could accelerate. On Tuesday, Sprint announced plans to increase the cost of all new smartphone plans by $10.

On the flip side, Sprint released the ZTE Peel in November. It's similar to a MiFi but is modeled to fit an iPod Touch. The Peel costs $80 plus $30 a month, no contract required. One other device besides the iPod can access the wireless connection.

The newest version of Google's Android operating system has an internet telephony protocol, called SIP, built in. However, few carriers have deployed this software to phones already on the market.

On the iPhone, Skype's audio and video calling app has been downloaded more than 4 million times.

Apple is not oblivious to the potential of an iPod phone either. Steve Jobs, the company's CEO, nodded to this very idea in September when unveiling the newest iPod Touch, which has two cameras for FaceTime video calling.

However, even tech-savvy people can tire of trying to use an iPod Touch as a phone.

Gary Rosen, a Venice, California, creative director for online campaigns, took to blogs and message boards to research whether his iPod Touch could serve as a phone. After some experiments with the device and a MiFi, he decided against it.

Now Rosen is looking for a way to trick his old iPhone into thinking it's an iPad, using SIM cards, to switch over to AT&T's less-expensive tablet data plan.

Even Stehling plans to give up on his "iPod phone" project mission soon. He's switching to a simpler, more conventional but pricier option.