How to spend $1,000 on your Verizon iPhone without even trying 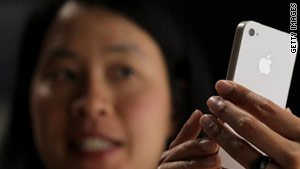 Verizon customers will be able to switch to an iPhone 4, but it might get costly.
STORY HIGHLIGHTS
RELATED TOPICS

(CNN) -- Now that Verizon is about to start selling the iPhone 4, there's a lot of buyer's remorse in the air.

Over the recent holiday season, many people purchased Android, BlackBerry, and other smartphone models from Verizon.

In an apparent attempt to ease (or perhaps capitalize on) customer grousing, Verizon is offering to reduce the cost of switching to its iPhone 4. On Tuesday, Boy Genius Report noted that Verizon's iPhone 4 FAQ page now includes this item:

Q: I just purchased a new smartphone during the holiday season, but if I knew that iPhone 4 was going to be available soon I would have waited. What are my options now?

A: Current Verizon customers who purchased and activated new smartphones, feature phones or certified pre-owned phones between Nov. 26, 2010, and Jan. 10 2011, are eligible to receive up to a $200 Visa debit card when they purchase an iPhone 4 at full retail price by Feb. 28, 2011 and return their existing phone. Note: This offer is only available on consumer accounts with five lines or less, who are purchasing iPhone 4 through Verizon Wireless retail stores, telesales, or through verizonwireless.com.

So, what's the "full retail price?" According to Verizon Wireless, iPhone 4 prices start at $200 for the 16GB model. But that's the subsidized promotional price that comes with a new two-year contract.

That's a pretty steep price tag. I doubt many customers would think getting a $200 rebate would sufficiently offset that expense.

But for any smartphone, the cost for the device is only the beginning. Data plan costs -- and their associated terms, limitations, and extra fees -- constitute most of what users pay over the life of the phone.

So far, Verizon has not revealed prices and terms for data plans for its iPhone 4. If some of the carrier's existing plans for other smartphones are applied to the iPhone 4, then it's likely that customers already on those plans would just be able to swap their phones.

However, if you'd need to switch to a new plan in order to use the iPhone 4, it's unclear whether early termination fees would apply. These can run as high as several hundred dollars, especially for recently purchased phones.

You could sell your current Verizon smartphone on eBay or Craigslist, and probably get more than $200 for it. But you'd still be stuck with your existing Verizon contract, which you may or may not be able to use with a Verizon iPhone4. And Verizon's $200 trade-in rebate requires that you return your old phone. So unless you sell your current phone for well over $200, this probably wouldn't be a good deal.

So here's the bottom line:

Say you bought a Motorola Droid Pro from Verizon on Dec. 24, 2010. You paid $180 for this device after a $100 mail-in rebate (which means that right now you're probably still waiting to receive that rebate debit card, even if you remembered to file the paperwork promptly).

But you really, really want a Verizon iPhone 4. So you select a package of talk, text, and data service that, with fees and taxes, ends up costing about $110 per month for 24 months.

When Verizon's iPhone 4 comes out, you swap in your phone and wait to get your $200 rebate card. In the meantime you're $650 out of pocket on the new phone.

If you're lucky, the iPhone 4 plan will cost no more than your current plan. But if you have to cancel your old contract and get a new one, you might have to pay another $350 for early termination.

So that's $930 in total device costs, minus $300 in total rebates due, for $630 in net device costs. Plus a possible ETF penalty of $350. That brings the total potential iPhone 4 swap cost to $980. And meanwhile, you're paying $110 per month or so for service. (The economics could be better for Verizon customers with family plans.)

Bottom line is: that $200 rebate probably won't really make this switch cheap, or even affordable, for most Verizon customers. Some people will still do it, of course -- and the phone-swap rebate might be enough to nudge some people over the edge into iPhone territory.

But I'm sure they'll still grouse about it.

The opinions expressed in this post are solely those of Amy Gahran. Thanks to Lisa Williams of Placeblogger for suggesting this headline.