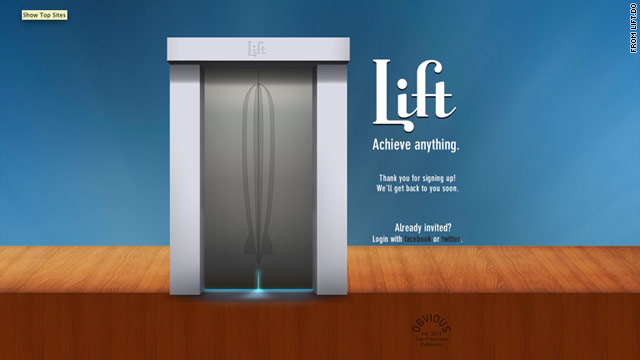 Lift is an upcoming app funded by Twitter's co-founders. What does it do? No one's sure.
STORY HIGHLIGHTS
RELATED TOPICS

(CNN) -- Twitter's co-founders announced this week that they are throwing their money and support behind a new app called Lift, which, according to a blog post that sounds like it was written by "Lost's" Dharma Initiative, is "an interesting new application for unlocking human potential through positive reinforcement."

"We love this software for what it does, and because we've tried it and it works. Our plan is to build something extraordinary together," the post says.

Right. Well. But what is Lift, exactly? And what makes it so awesome that every tech blog on the planet is writing about it despite the fact the app is in "alpha testing" and isn't open to pretty much anyone.

Perhaps it's the fact that Evan Williams and Biz Stone, author of Tuesday's aforementioned welcome-to-the-future announcement, are such rock stars in the tech world. This is the first investment for the Obvious Corporation (yes, that's the real name), which the Twitter alums started this year. Obvious' goal, as stated on its website -- which, obviously, is obvious.com -- is to make "systems that help people work together to improve the world."

The partnership between Obvious and Lift is "more interesting" than the "scant details" about the app itself, writes Pascal-Emmanuel Gobry at the blog the Silicon Alley Insider.

ReadWriteWeb, a tech blog, offers some analysis about what the new Lift app may look like.

"It sounds like Twitter in its simplicity and from what I've seen it looks a lot like Twitter too -- but with more structure," Marshall Kirkpatrick writes in a post on that site. "What's called Lift today was apparently called Mibbles just weeks ago and was described then as 'a very simple tracking and encouragement tool.' "

Williams and Stone are funding Lift, but the app's creators are Jon Crosby and Tony Stubblebine, who are also big names in the tech world.

In a blog post called "Uplifting News About an Obvious Partnership," Stubblebine writes that he and Crosby "do have a prototype" of the app, "but we're a long way from opening the doors" to the public.

"Our intention is to create a long-lived company. But unlike my last company, we're not set on doing this alone. Enter Obvious," he writes.

TechCrunch, another tech blog, did some digging in the code of the Lift website and found a humorous clue about the app's future.

Hidden in the code is this statement: "Lift. Achieve anything (assuming we finish building this app)."

Robin Wauters, the post's author, gives Lift the benefit of the doubt:

"I assume they will (finish the app)," he writes. "Can't wait to finally be able to achieve anything!"