Walking could power your next cell phone, researchers say 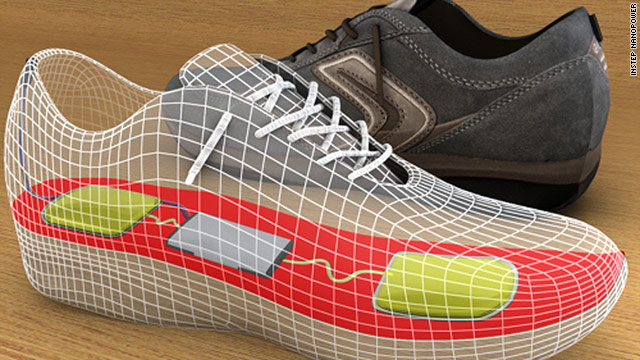 An "energy harvester" in a user's shoe could convert energy from walking into power for cell phones, researchers say.
STORY HIGHLIGHTS
RELATED TOPICS

(CNN) -- Will you be able to charge your next mobile phone simply by walking around?

A group of researchers at the University of Wisconsin-Madison hope so.

In an article this week in the journal Nature Communications, they unveiled a technology that would harness part of the energy people generate when they walk and push it to a phone or other mobile device.

"Humans, generally speaking, are very powerful energy-producing machines," Tom Krupenkin, a UW-Madison professor of mechanical engineering, said in a news release from the school. "While sprinting, a person can produce as much as a kilowatt of power."

He said harvesting even a small fraction of that power is enough to power a cell phone, laptop, flashlight or other electronics.

Under the system, an "energy harvester" that would be installed in a person's shoe would capture some of the mechanical energy that typically burns away as heat and convert it to up to 20 watts of electrical power for a personal device.

The harvester would act as an intermediate transceiver, or Wi-Fi hot spot, to serve as a "middle man" between a mobile device and a wireless network, thereby reducing the amount of energy the phone needs to send and receive signals.

(We're pretty sure that's a good description, at any rate. Read the report, by Krupenkin and J. Ashley Taylor, for yourself here.)

The researchers say making their technology widely available would have a positive environmental impact, reducing society's need for batteries and the pollution that ensues when they are disposed of improperly.

It would also have an impact in poor and developing countries, where charging electronics is often either impossible or expensive, and could benefit soldiers and police officers needing to power things like communications equipment and night-vision goggles, they say.

But what about everyday smartphone users who are tempted to yank their hair out after a few hours of using their phone without a charger handy?

"You cut the power requirements of your cell phone dramatically by doing this," he said.

The technology was developed with a grant from the National Science Foundation. Now Krupenkin and Taylor hope to make some money with it through a company they've created, InStep NanoPower.