A goat walks into an Apple store ... 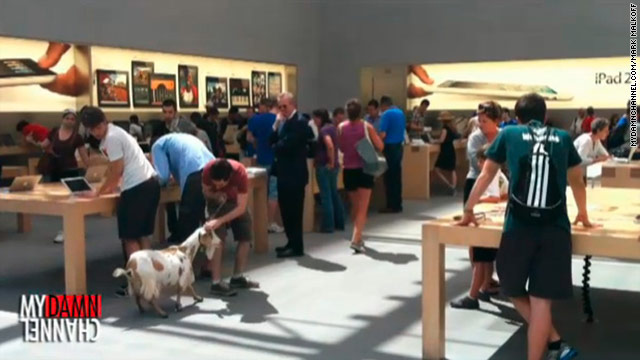 (CNN) -- Despite their pristine, sterile appearance, Apple stores are known for tolerating eccentricities.

Witness customers browsing inside the stores with their dogs, or the recent trend of people breaking into videotaped dances

amid the tables of gleaming MacBooks and iPads.

But did you know you can order (and eat) a pizza in an Apple store? Come dressed as Darth Vader and get someone to look at your broken iPhone? Or even visit a store with a live goat?

Apparently, you can. We know this now courtesy of comedian Mark Malkoff, who tried all these stunts and more in a video posted this week to MyDamnChannel, the Gothamist and other sites.

"My question: Is there a limit to what the Apple store will allow?" asks Malkoff in the clip, which has racked up more than 100,000 views.

Presumably yes -- although it's hard to tell from the video, in which Apple store employees tolerate and even seem amused by Malkoff's antics, which culminate in him leading a balky goat into a store on Broadway and 67th Street in Manhattan.

"I will not rest until every electronics store in America allows goats," said Malkoff on Twitter Tuesday.