What's this Spotify thing all about? 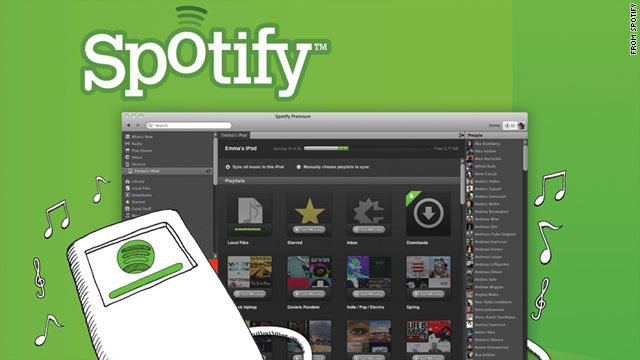 Spotify works kind of like iTunes, but you stream songs from a "rented" catalog of online music.
STORY HIGHLIGHTS

(CNN) -- It's hard to escape buzz about Spotify this week -- especially since Britney Spears and others are "so excited" about it.

The rapper Talib Kweli says "music is about to be fun again."

But what makes Spotify -- a music-streaming site that's already popular in Europe and launched in the United States on Thursday -- so awesome that it would cause these tweets from musicians?

Many U.S. music fans will have to wait a few weeks to find out. As CNN's Mark Milian reports, Spotify is available in the U.S. by invitation only -- or for paying customers.

So before you shell out your cash for this music-streaming service, here's a look at what makes Spotify unique.

The music catalog is huge

First, a little background: Spotify -- the name is a combination of "spot" and "identify" -- is a music streaming service, which means it lets you play songs off the Internet. So it's kind of like Pandora, except that you can search for songs and create playlists from a catalog of 15 million tracks. On Pandora, you just pick a "radio station" and listen to whatever songs a computer chooses for you. You can't pick which songs come up.

Spotify also faces competition from Rdio and Turntable.fm, which offer versions of this playlist approach.

Well, mostly. With an invitation, users in the U.S. can play songs with some ads sprinkled in for good financial measure. For $5 per month, the ads go away and you get unlimited streaming. For $10, you can listen to Spotify's music on your mobile phone, too.

Again, the response from the tech world is largely positive.

"I've been using Spotify for a year and a half here in England, and it's been a real test: I left my CD collection packed up in boxes," CNET's Stephen Shankland says.

iTunes, Apple's hugely popular music player, is easy to use. So is Spotify. In reviews, tech writers note how fast the system works, and how easy it is to find music and add songs to your playlists.

If you sign in with Facebook, you can see what all of your friends have been listening to on Spotify -- and even play their playlists.

That may sound obvious or boring, but remember that you don't have to own your friends' songs in order to play them. It's the modern mixtape.

It changes the way people think about music

Record stores and iTunes taught music lovers that songs and albums must be purchased individually. While you can purchase music on Spotify, the site also promotes a pay-by-the-month approach. For a monthly fee -- which is less than the cost of a single album -- you get access to tons of music. And you can play it from wherever you want. Spotify also offers download options, so you can play some songs even if you don't currently have an Internet connection.

And this all works smoothly, writes Rosa Golijan at MSNBC:

"I constantly forget that all the music I'm listening to is not actually on my computer or mobile device, but instead being consistently streamed at a reasonable quality -- no matter how slow my Internet connection occasionally can be. (Mind you, songs can be stored for offline play so that you're never music-less even if stuck without an internet connection or decent mobile data service.)"

It's been years in the making

Spotify was founded in Sweden in 2006. Since then, U.S. tech heads have been clamoring for the service to skip across the pond.

That launch has been stalled in negotiations with record labels, and that's caused anticipation about the service to build. With all those negotiations said and done, it appears Spotify is now a legal product in the states.

It lets you take music anywhere

If you pay $10 a month for the premium service, you can listen to all of your Spotify playlists -- keep in mind, this is music you're "renting," not music that you have purchased by the song -- right on your phone. If you lose your Internet connection (or if you're getting on a plane), you can download Spotify songs into the company's app and listen to them offline -- for no extra charge.

OK, so those were all the good things. What about the bad stuff?

Some analysts say Spotify will have a hard time busting into the U.S. market, which is already full of music streaming sites that are popular. Pandora says it has 100 million users, which makes it a particularly formidable foe.

There's also some question about whether the Spotify model is actually good for the artists whose songs you're listening to so freely.

Artists earn only $0.004 when you listen to one of their songs, according to analyst Mark Milligan, quoted by the BBC.

But, as the Twitter chatter shows, some artists support this alternative.