Four years later, has iPhone changed that much? 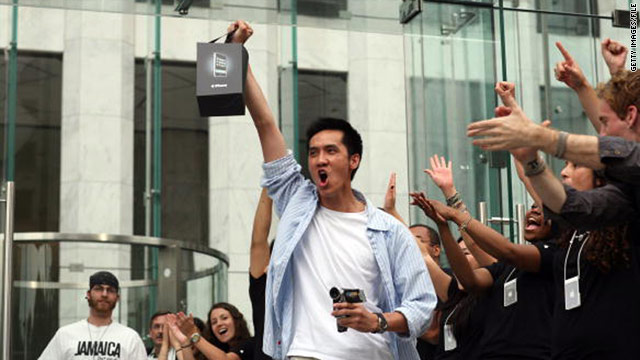 The original iPhone went on sale on June 29, 2007. Here, a proud owner diplays one outside Apple's flagship store in New York.
STORY HIGHLIGHTS

By that we mean the "original iPhone," the one Apple CEO Steve Jobs announced in January 2007 and that went on sale -- to much fanfare and talk about a mobile "revolution" -- on June 29 that year.

It's hard to overstate the importance of that product on mobile computing, a field that really didn't exist until Apple came out with what was, at the time at least, probably the "smartest" and easiest to use of the smartphones.

In a presentation before showing off the iPhone -- which has a big touch screen and basically one button, a huge step away from the clickity-clack keyboards and postage-stamp screens of the day -- Jobs joked that Apple was just going to slap a rotary phone dial on top of an old-school iPod.

"Today Apple is going to reinvent the phone -- and here it is," he said. A picture of the rotary iPod-phone came on screen, to laughs.

That day in 2007 may seem like forever ago -- or just yesterday. 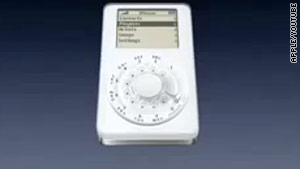 Apple's CEO joked in 2007 that the iPhone would look like an iPod plus a rotary phone dial.

In technology, four years is an eternity. And the specs of the original iPhone do, in some respects, reflect how much has changed in that time.

The iPhone 4 shaved 2.3 millimeters off its waistline compared with the original iPhone, which was 11.6 millimeters thick. The new phone's camera is better -- 5 megapixels instead of 2. Its screen is sharper. Its processor is significantly faster, of course. And there's an app store now to support many new iPhone features, which didn't exist in June 2007.

The prices have changed, too.

The original iPhone, with 4 gigabytes of storage, went on sale for $500.

An iPhone 4 with 16 gigabytes of storage now costs $200 with a contract.

(Fun tech history aside: Microsoft CEO Steve Ballmer literally laughed at the iPhone's price in a 2007 interview: "$500?! Fully subsidized?! With a plan?!" he said in a voice that climbed into opera-singer octaves. "I said that's the most expensive phone in the world, and it doesn't appeal to business customers because it doesn't have a keyboard. ...") 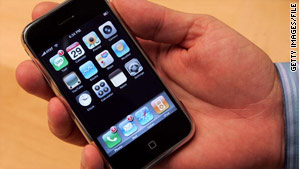 The design of the 2007 iPhone looks remarkably similar to the current model, which some fans appreciate.

But put the original iPhone next to the iPhone 4, and they do look really similar.

"The soul of the original is clearly still in place," Alex Rainert, the product head at Foursquare, wrote in response to a question about the iPhone on Twitter.

Maybe not all that much has changed.

"I think the original iPhone would still be a decent phone to use for a lot of people," said Roberto Sarjoo, a 27-year-old in Toronto who has owned all four iPhone versions. "The processing power would be slow, but because they've updated the software it's easier to use. ... It would still be a great phone."

Apple, however, no longer supports the original iPhone. The fourth version of Apple's mobile operating system -- iOS 4 -- doesn't work at all on the original. And only limited features work on the iPhone 3G.

Some Apple fans still get nostalgic about the original phone.

"It was like nothing on the market -- nothing like anything anyone had seen before. It was exciting and addictive at the same time," said Henry Mbadugha, a 27-year-old in New Jersey who has owned each iPhone model.

At this point, pretty much any degree of Apple fanaticism is hardly surprising. People wait in overnight lines to get new iPhone models. Apparently some kid had an iPhone-themed birthday party.

This got us wondering: Is anyone out there actually celebrating the iPhone's fourth birthday? If so, let us know in the comments section.