Can one idea be energy's holy grail?

(CNN) -- Michel Laberge quit his job to invent a "glorified jackhammer" that he hoped would save the planet. That was 10 years ago.

Now, investors are betting more than $30 million on that jackhammer idea, which may yield a holy grail of energy -- a safe, clean and unlimited power source called hot fusion.

Laberge is trying to do something that no one has ever done: create a controlled "net gain" fusion reaction that creates more energy than is required to produce it. It's the same process that powers our sun. If it works, it could solve huge problems like climate change, the energy crunch and reliance on foreign oil.

But the competition to get there first is stiff. Thousands of scientists backed by the world's most powerful governments are racing against Laberge and his 50 colleagues working at an office park lab near Vancouver, British Columbia.

"This is a bit crazy -- the small guy trying to win the same thing as the big guys," admits the 49-year-old physicist. Some observers in the physics community wonder if upstarts like Laberge are being strangled by giant multibillion-dollar research projects.

Laberge says he's never wanted to rub shoulders with the cool kids at top-shelf facilities at Oak Ridge, Tennessee, and Livermore, California. "It's very boring to work on the big projects," says Laberge. They're "too big, too expensive, too complicated."

But don't call him a rebel. "I like to do some things differently," Laberge says. "I'm nonconventional, but I'm not a rebel."

He fears the next generation, including his own two children, are threatened by a world that's running out of fuel. "If we don't do something about energy we're going to be living in little huts with windmills on top," says Laberge. "For food, you're going to be growing tomatoes on the backside." 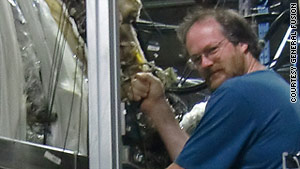 "I like to do some things differently, I'm nonconventional, but I'm not a rebel," says fusion energy pioneer Michel Laberge.

A decade ago, it was Laberge's self-described mid-life crisis that brought him to a career crossroads. Despite success designing technology for printing direct mail materials, he remained unsatisfied. "I was cutting the forest and burying you under junk mail," he remembers. "I said, 'What am I doing here?'"

Laberge took a chance and left Creo to chase his longtime fascination with fusion.

"I had fusion on the brain," he recalls.

"I sat at home on my couch for about six months, to the great despair of my wife, calculating all sorts of fusion schemes." Eventually, Laberge had his "aha" moment: a precision controlled piston that hammers giant shock waves into a magnetized sphere -- slamming atoms together hard enough to fuse and create energy.

The idea triggered investments in Laberge's young company, first from family and friends, then from venture capitalists including Amazon.com founder Jeff Bezos. So far, funding has totaled $32.5 million.

That sounds like a lot until you consider that the world's biggest fusion research facility -- under construction in France -- is expected to cost $20 billion. That's billion with a "b."

Named ITER -- the Latin word for "journey" -- the project is funded and staffed by the United States, European Union and five other nations. 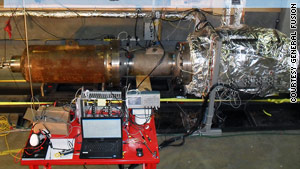 Laberge designed this giant piston -- or "glorified jackhammer" -- as part of a planned fusion reactor.

China announced in May it will train 2,000 scientists for fusion research. Beijing "is going gung ho on this," says Glen Wurden, a top fusion scientist at the cradle of the atom bomb: New Mexico's Los Alamos National Laboratory. The facility has joined Laberge's company, General Fusion, in a cooperative research agreement.

Does Laberge have a shot? His idea is "definitely worth studying," Wurden says.

"I would love to see that fusion can be done so economically, and so I hope they succeed," Sauthoff says. "ITER is the way that you go if you really want high confidence. But you have to pay more for high confidence."

Another giant fusion project, the National Ignition Facility at California's Lawrence Livermore Laboratory, is using the world's largest lasers to attempt a fusion breakthrough by 2012 at a cost of about $5 billion.

"ITER and NIF are expensive and they take lots of energy," says Wurden. "We think there is a cheaper solution between the two."

"Basically, glorified jackhammers are cheaper than lasers," Laberge says with a laugh.

General Fusion aims to achieve net gain fusion experimentally in 2012. By 2018, it plans to complete a power plant prototype that would generate 100 megawatts, enough to power about 100,000 homes.

"We would like to be in a commercial stage of being able to take orders and build power plants by the end of the decade," said Michael Delage, General Fusion VP of business development.

Fusion could change everything -- or not

Could fusion change the way powerful governments behave on the world stage?

Cutting dependence on foreign oil could prompt nations to shift attention away from oil-rich regions. The U.S. military already spends at least $50 billion yearly on "expenditures related to oil," according to the American Security Project, a bipartisan Washington think tank.

"I was cutting the forest and burying you under junk mail. I said, 'What am I doing here?'"
--Physicist Michel Laberge

If fusion sounds familiar it's because science has been promising it for decades.

A historic fusion breakthrough is "really close," Wurden says, but developing a successful commercial fusion power plant is further off.

"So, if somebody tells you they're going to solve global warming with nuclear fusion three years from now just laugh them out of the street. OK? It's not going to happen."

"Fusion physicists are probably some of the worst people in the world at predicting the future in terms of how easy it's going to be for the next step," says Mike Dunne, Livermore's program director of laser fusion energy.

Fusion differs from conventional nuclear power because it makes energy by smashing atoms together to create new atoms instead of splitting them apart.

This year, Japan's nuclear plant crisis after an earthquake and tsunami showed the hazards posed by deadly radioactive fuel rods, which eventually must be disposed of safely.

In fusion, there is no threat of a meltdown and no waste from the fuel. Although the reactor and its components will become radioactive after years of exposure to the process, this radioactivity disappears after a few decades. Conventional nuclear fuel rods need thousands of years to lose radioactivity.

But anti-nuclear groups have expressed concern about whether fusion research opens a door to nuclear weapons proliferation. Tritium can be used to boost the power of nuclear weapons. Fusion research, they say, could contribute to development of a so-called pure fusion weapon.

"The government did look at this in some detail," said Dunne, who added that there are always fringe groups who are suspicious of "nefarious activities" when it comes to nuclear research.

Washington is comfortable that this technology provides no opportunities "for nuclear proliferation or advancement of other country's weapons capability," said Dunne. The development of commercial fusion, he says, has no defense applications.

The current budget-slashing climate on Capitol Hill doesn't bode well for fusion research. The 2012 federal budget is expected to provide about $400 million total.

But now that Congress is taking a hard look at budget cuts, lawmakers want more than ever to see encouraging results. The pressure is on to either produce results or re-think spending priorities.

If somebody tells you they're going to solve global warming three years from now just laugh them out of the street.
--Glen Wurden, Los Alamos National Laboratory
RELATED TOPICS

An intensified scramble for cash could hurt other small players, such as Seattle-based Helion Energy and a secretive outfit with ties to the University of California called TriAlpha Energy.

"I hope that ITER and NIF -- these two giant elephants in the room -- won't absorb all the resources in the world just to do fusion a particular way," says Wurden.

Whatever the case, China and India's huge populations will need more and more energy each year and climatologists fear the worst from continued reliance on fossil fuels.

"We're burning the candle at both ends," Laberge says. "The standard of living is increasing rapidly due to technology and we're burning resources faster than they're being replenished. Sooner or later it's all going to come crashing down."

If that scenario comes to pass, will science be ready to tackle the challenge?