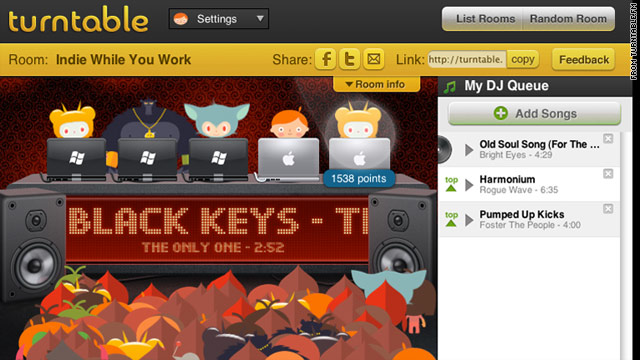 (CNN) -- Everyone knows Pandora -- that popular music-streaming site where robots pick songs for you based on equations.

Well there's a new kid in town: Turntable.fm. And its philosophy is almost perfectly anti-Pandora.

Instead of computers, real people pick the songs, in real-time.

The site turns this process into a concert-like game.

Here's how it works: When you show up, you see a list of all of the "rooms" where DJs are currently playing. You can see what type of music these small online venues typically play, and what song is currently on.

When you click on a room, your avatar -- the people in Turntable.fm are cartoon mice, kids and aliens, which is weird, but go with it for a second -- enters and finds itself standing in a crowd of other people who are in that room at that very moment.

From one to five DJs are standing at a table in front of you, and they take turns picking the songs that will be played in that venue.

If you like their choices, click the "awesome" button. If you're sick of all the Coldplay remixes, there's another button: "lame."

Of course, you can also become a DJ, which is part of the power of the site, writes Peter Kafka on All Things Digital:

"Turntable.fm is a little miracle that does something simple and essential: It lets you play your favorite songs for your friends and strangers on the Web, in real time, for free."

"The early adopting tech elites are eating this site up, just as they did Twitter, Foursquare, Instagram, and others," Steve Poland wrote on that influential blog. "Barring some awful interference, this app is going to break big and change things."

The site's co-founder, Seth Goldstein, told CNN he would not respond to questions about the service until Turntable.fm opens fully to the public.

For now, one of your Facebook friends has to be on the site already in order for you to get access.

There are questions about Turntable.fm's legality, too.

Turntable.fm DJ's can choose from songs in the site's library, which is hosted by MediaNet, an online platform with millions of songs.

Or you can also upload mp3 files to the site and play those, too.

That part seems questionably legal to some.

Again, from Kafka at All Things Digital:

"The risk for Turntable is the same one every music start-up without label deals faces: Not that a court will find them guilty of something, but that they'll have to spend a lot of time and money on lawyers.

"And while it seems blindingly obvious that Turntable.fm is a great thing for the music business -- it lets music fans tell other music fans about music they like, the best possible advertising -- I wouldn't put it past a label or two to gripe about the service. Particularly if it makes the leap from the digerati into the mainstream."

Give the site a try and let us know what you think in the comments. Does Turntable.fm live up to all the buzz? Or is it just hype?