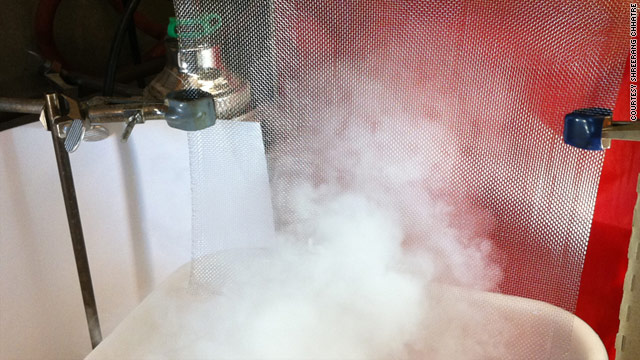 An MIT researcher is trying to improve nets like this one that collect moisture in fog for drinking water.
STORY HIGHLIGHTS
RELATED TOPICS

(CNN) -- Let's say you live in a really dry area and you don't have much drinking water. Meanwhile, you wake up every morning to the sight of fog floating by. Instead of walking miles and miles to get water from a faraway river, what if you could just extract drinking water from those low-hanging clouds?

That's what a researcher at MIT is trying to make possible with new work to improve "fog harvesting," the term for the process of getting water out of mist by using giant tarps made out of engineered materials.

The art of fog harvesting is simultaneously high- and low-tech.

To catch the fog, workers erect giant nets on stands of bamboo sticks or metal poles. This contraption catches the fog as it floats though the meshed material.

The nets don't catch all that much water -- about 1 liter for a net that measures 1 meter by 1 meter -- but that's enough to make a big difference in some parts of the developing world, said Shreerang Chhatre, a Ph.D. candidate at MIT who is doing research on materials that could improve fog technology.

"If you're thinking from a Western point of view, from the point of view of a Western consumer who consumes 200 liters of water every day" then this technology doesn't make much sense, he said. "In order to get that, we would need a humongous, huge surface. We want to get drinking water, water that is absolutely necessary for survival for people. That, we need in small quantities."

Chhatre is trying to improve the materials the fog nets are made of so that they will collect more water. The nets he's working on are made of tiny steel rods woven together until they look somewhat like a chain-link fence. The metal is coated with two materials, one that attracts water and one that repels it.

The goal is to attract the fog to the net, but once it touches the surface, Chhatre wants the liquid to roll down the contraption as fast as possible and into a bucket. If the water remains on the net for a long time, it evaporates, he said. A water-repelling compound, which acts somewhat like Teflon on a frying pan, encourages the water to roll down the net for collection.

It's unclear how well the materials Chhatre is developing will work in the real world. So far he's only done lab tests on this engineered mesh.

He is not the first person to work on fog-harvesting technology.

A Canadian nonprofit called FogQuest has been installing moisture-catching nets in remote desert areas for about 10 years.

Still, there are only about 15 active fog-catching projects in the world, said Robert Schemenauer, FogQuest's executive director.

The technology has the potential to change lives in remote areas of mountainous deserts, where fog is really the only water source, he said, but it won't work in cities or even large towns, because fog collectors produce such a small volume of water. That's why the idea hasn't taken off in a big way, he said.

The group has installed fog collectors in countries like Guatemala, Chile, Nepal, Eritrea and Yemen. One net covers 430 square feet, and the whole structure costs about $1,000, he said. In one mountainous village in Guatemala, FogQuest installed 35 nets to catch fog, he said.

Schemenauer is somewhat skeptical of developing new materials to improve fog collection. FogQuest uses cheap, agricultural shade nets for its fog collectors. There's room for that technology to be improved, he said. But many researchers have tried to develop a material that will catch more water at less cost.

"A thousand people have wanted to try to build a better material for collecting fog droplets and no one has done it very well -- yet," he said.

"I have absolutely no problem if you can design a particular material that would work better and would have other properties that are better. We'd certainly look at it," he said. "But you also have to think about the manufacturing side of it. We are using something that is used in vast amounts for another purpose, so the cost is really low."

Chhatre said he believes his higher-tech material may prove to be more efficient at collecting water from fog and will be low-cost.

"It helps tune the motion of the droplets so we can collect the maximum amount of water," he said.

If he succeeds, the practice of fog harvesting may someday be common in areas where water is scarce.