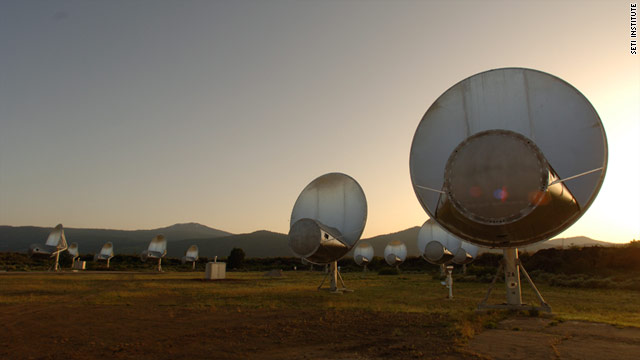 The Allen Telescope Array is a field of dish-like scopes some 300 miles north of San Francisco.
STORY HIGHLIGHTS
RELATED TOPICS

(CNN) -- Interstellar radio has lost one of its most avid listeners.

A collection of sophisticated radio telescopes in California that scan the heavens for extraterrestrial signals has suspended operations because of lack of funding, a spokeswoman said Monday.

The Search for Extraterrestrial Intelligence Institute operates the Allen Telescope Array, the field of dish-like scopes some 300 miles north of San Francisco. The telescopes are a joint effort of SETI and University of California-Berkeley's Radio Astronomy Lab and have been funded largely by Microsoft co-founder Paul Allen, who donated more than $25 million to the project.

A state budget crisis and reduced federal dollars have choked the project of funding, said Karen Randall, SETI's director of special projects. SETI put the Allen Telescope Array on hold a week ago -- a situation publicly revealed by Franck Marchis, a principal investigator for SETI who doesn't work on the affected project, on his blog.

SETI CEO Tom Pierson sent an April 22 letter to donors saying the telescope array had been put into "hibernation," Randall said. Pierson's letter stated in part, "Starting this week, the equipment is unavailable for normal observations and is being maintained in a safe state by a significantly reduced staff."

The Allen Telescope Array will resume operations by 2013, when SETI's new round of funding goes into effect, Randall said. The funding will cover the project until 2018, she said. In the meantime, SETI is searching for quick cash.

"Obviously, we want to be prepared for these kinds of things," Randall said of financial obstacles. "We are working on some other angles that have bubbled up that will basically not be so vulnerable to budget cycles."

SETI since last month has been soliciting donations to fund the Allen project. The organization says it needs to raise $5 million. Randall said she hasn't talked with Allen about contributing additional funds.

The Allen radio telescopes aren't the only ones that SETI can use to listen to the universe. SETI also analyzes data gathered by radio telescopes in West Virginia, Puerto Rico and Australia, as well as the Hubble Space Telescope and the Spitzer Space Telescope, although SETI researchers must compete for time on those instruments.

The SETI Institute is based in Mountain View, in California's Silicon Valley. According to its website it employs over 150 scientists, educators and support staff, and gets most of its funding from private donations and non-governmental grants.

Research at the institute is anchored by two centers: The Center for SETI Research, which seeks evidence of extraterrestrial life by looking for some signature of its technology; and the Carl Sagan Center for the Study of Life in the Universe, which examines the origin, evolution and distribution of life forms on Earth and beyond.

It was not immediately clear how the budget crunch at SETI would affect its other astrobiology programs.

The idea for constructing the Allen Telescope Array was conceived in 1997. Four years later, Allen agreed to fund the venture and construction of the initial 42 antennas, located in Northern California's rural Cascade Mountains. SETI has said it plans to eventually grow the number of dishes to 350.

The array's 20-foot-wide telescopes, spread across several acres, don't send messages into space but scan the cosmos for signals of extraterrestrial origin. Unlike previously existing radio telescopes, which scan the sky for limited periods, the Allen Telescope Array probed the universe round the clock.

Each of the 42 dishes is aimed at a different area of the sky, collecting reams of data that are being studied by computers for unusual patterns.

SETI also is known for its most visible staffer, astronomer Jill Tarter, current director of the Center for SETI Research and the real-life inspiration for Jodie Foster's character in the 1997 movie "Contact."

"At SETI, our current mission isn't to broadcast, but rather to listen to the universe and see what else might be out there," she wrote last year in a commentary published on CNN.com. "If signals are detected, everyone on the planet should have a voice in deciding how to respond."

The cutbacks at SETI and UC-Berkeley come at a challenging time for space exploration. NASA is ending its space shuttle program, and the agency faces "tough fiscal times, tough choices" for its 2012 budget, Administrator Charles Bolden said recently.

The lab will lay off four people due to a lack of operating revenue, leaving two support staff, said Robert Sanders, a spokesman for the school. The group begun shrinking in 2009 when Berkeley laid off several staff, he said.