Site wants to make something of your 'aha!' moments 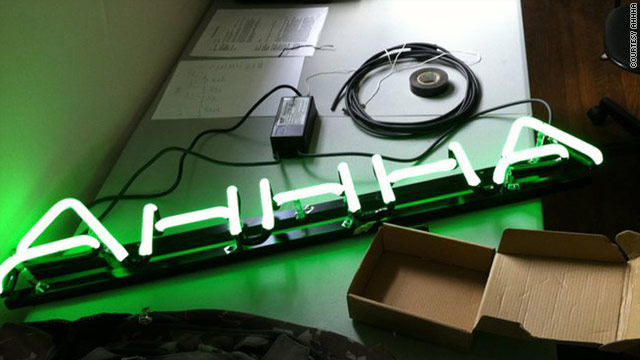 Matt Crowe said the idea for his new website Ahhha came to him over time -- not in an instant.
STORY HIGHLIGHTS
RELATED TOPICS

(CNN) -- Everyone has ideas. But only about 2% of us actually turn our "aha moments" into inventions, says Matt Crowe, founder of a new social website called Ahhha, which aims to fix that problem.

"It's like a little vision into the world of what people are thinking in their heads," he said of the site, which launched two weeks ago. "A lot of (the ideas) are really ingenious."

A question greets visitors to the site: "What's your idea?"

Those who submit ideas to the site get suggestions from Ahhha's community, which can vote the project up and down. Unlike other "crowdfunding" sites, like Kickstarter or RocketHub, Ahhha is "like 'American Idol,' " Crowe said. The best ideas, as voted on by the site's users and determined by Ahhha staff, will be given funding or connections to make the project a reality.

"It's not Ahhha's job to say your idea is a good idea or a bad idea. It's the crowd. It's the user community. That's the wisdom of the crowd: Organically, the best ideas bubble up, and we're able to skim the cream off the top."

Crowe said it's this link between idea and execution that's really missing in most peoples' lives. The site targets people who may have an idea but don't know what tools would help them act on their pipe dreams.

"What we've essentially done is greased those gears to help users get execution (on their ideas) in an easy way," he said.

This is particularly important, he said, because formal methods of applying for patents and seeking venture capital funding are confusing or inaccessible to most people.

Applications for patents can languish for months or even years at the U.S. Patent and Trademark Office, which cannot keep up with its workload. Ahhha plans a "turbo" patent application feature, which Crowe says will help people work through that process.

Among the proposed projects currently on the site: a vending machine that sells only healthy food, such as protein shakes and granola bars; a trancontinental pneumatic tube system for shipping packages rapidly across the country; and a smartphone app that lets shoppers find the exact location of a product in a supermarket.

The site hasn't funded any projects yet and wouldn't release user numbers.

It also has been criticized for hosting primarily silly projects.

"A comparison voting system is supposed to help the good ideas bubble up, but currently non-serious and joke ideas flood the site, burying the few good ones on it," writes Rafe Needleman at CNET.

Less-serious ideas that have been floated on Ahhha include dental tools that don't make any noise, a "clear" red wine that does not stain your teeth and, um, a screen door for a submarine.

Crowe, 28, said the idea for Ahhha came to him over time, not in an instant. His first big idea: In elementary school, he created a rake that folds in half to help with yard work at his parents' home.

"I've had lots of ideas. Some are crap, some are good, and hopefully this one is a really great one. Ahhha!" he said.