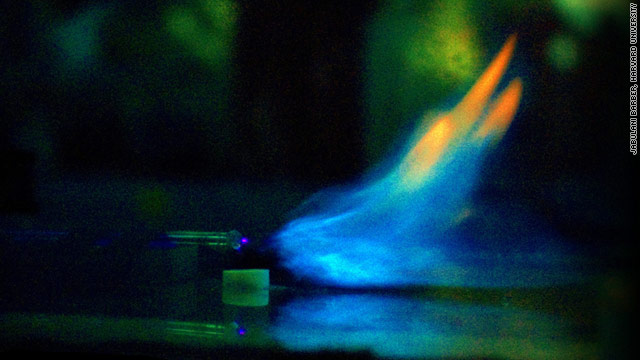 A flame is deflected by an electric field generated by a wire electrode during the study at Harvard University.
STORY HIGHLIGHTS
RELATED TOPICS

(CNN) -- Could firefighters one day use an electric wand to zap flames away?

In a new study, Harvard University scientists say they used an electric field to extinguish an open flame more than 1 foot tall -- a development they say could yield fire-suppression alternatives to water and chemical retardants.

The scientists, part of a group headed by chemistry professor George M. Whitesides, connected a 600-watt amplifier to a metal wire that was fixed in place and pointed at the base of a methane flame.

When the amplifier was turned on, the wand-like wire, serving as an electrode, generated an oscillating electric field that essentially pushed the flame off its fuel source. This extinguished it, said chemist and lead author Ludovico Cademartiri, a postdoctoral fellow who presented the findings in California on Sunday at a meeting of the American Chemical Society.

The researchers say scientists have known for 200 years that electricity can exert force on charges and affect flames' shape.

"What we discovered is that if one uses an oscillating electric field ... there are a number of mechanisms that come into play that have much stronger effects on the flames," Cademartiri said in a telephone interview Wednesday.

"With the motion of the gas, what happens, this motion is strong enough to dislodge the flame from the fuel source -- in our case, from the stream of methane we were using," Cademartiri said.

Wood might be more complicated, given that hot embers might reignite the flame. But while systematic studies haven't been done with wood fires -- in part because they are harder to control for -- the team did extinguish a wood fire with an electric field, Cademartiri said.

In an ACS news release, Cademartiri speculated that devices based on the phenomenon could be embedded in buildings like water sprinklers, ready to zap fires with electric fields.

Or, firefighters might carry a device in a backpack (Cademartiri believes a 10th of the wattage used in the experiment could have a similar effect) and distribute the electric field with a handheld wand, perhaps creating viable escape paths if nothing else. Asked whether carrying this electric power into a fire would be problematic, he said much depends on how a device is engineered, but electric fields could be generated safely.

Such uses are just speculation, and the team has just started looking at how electric fields' effects scale to the size of flames. (They'll probably be more useful in fighting flames in enclosed spaces, he said.) But people in the fire suppression industry and academia already have expressed interest in the study, Cademartiri said.

And there might be applications beyond fire suppression. Perhaps electric fields could be used to make combustion, which is how much of the world's energy is produced, more efficient, he said.

"We're at the initial stages of discovery, and we're still working through the science and trying to understand what it us going on," he said.