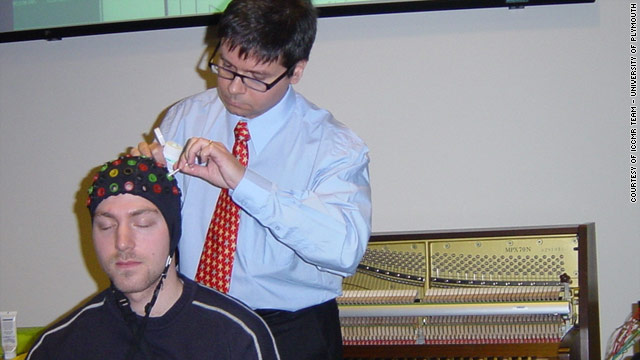 London (CNN) -- A new computer system which plays music using brainpower alone is being developed by researchers in the UK with the aim of helping people suffering from severe physical disabilities.

The brain-computer music interface (BCMI), which creates music in response to electrical impulses given off in the brain, was recently tested on a patient suffering from Locked-in Syndrome at the Royal Hospital for Neuro-disability (RHN) in London with encouraging results, say the researchers.

"It started as a musical project which became a scientific project," said Eduardo Miranda, a composer and computer music specialist from the UK's University of Plymouth, who co-developed the system.

Technological advances in recent years have fueled interest of brain-computer interfaces, but their ability to provide musical therapy for people who would benefit from it the most remains relatively unexplored, Miranda says.

When a person looks at one of the flashing icons we can detect which one the person is looking at.
--Eduardo Miranda, University of Plymouth

So, four years ago he set about developing a prototype, before enlisting the help of computer scientists from the UK's University of Essex and RHN music therapist Wendy Magee to create a working device.

Miranda created four icons which flash at different frequencies on a computer monitor.

When a person looks at a flashing light at a certain frequency, Miranda says, this shows up in an electroencephalograph (EEG) -- an instrument which measures neural activity on the scalp.

Electrodes pick up these faint signals which are amplified and then fed into a computer.

"When a person looks at one of the flashing icons we can detect which one the person is looking at. What is interesting about this approach is that it is also possible to detect the intensity of the gaze -- the more you look at the icon the stronger the EEG signal becomes," Miranda said.

Miranda created four different music algorithms which translate an icon's light frequencies into distinct musical processes. Looking at one of them would sound a note, staring at it would change its pitch.

Working on the same principal, the other icons allows users to activate and manipulate rhythm, volume and speed.

The system requires some initial tutoring, but the patient in the trial -- who relies on eye gaze to communicate -- picked it up very quickly, playing music by herself after only 15 to 20 minutes, Miranda says.

Wendy Magee, co-author of a paper describing the research, which appears in the journal Music and Medicine, says the patient not only enjoyed using the system but also found it interesting.

"She was pleased she had been able to contribute in some way to the research and said that she really enjoyed being in control again," Magee said.

"Theoretically, we knew that the system should be helpful for people with disability. Now we have the demonstrable proof," she added.

Magee says there is enough evidence now to suggest that music therapy in general really does work for people with all kinds of disability.

"It helps motivate the patient to engage in their wider rehabilitation. Music as a treatment intervention is a useful vehicle for addressing broader functional non-musical behaviors," Magee said.

Clinical research into Rhythmic Auditory Stimulation (RAS) -- a neurological therapy which uses music as a cue to regulate body movement -- has demonstrated how it can help with gait problems in people suffering from acquired brain injury, she says.

And a 2008 study by researchers in Finland found that listening to music following a stroke can improve cognitive ability.

"What the latest research is saying is that music is like a mega-vitamin for the brain -- it lights up networks, and works across both hemispheres (of the brain)," Magee said.

Researchers all over the world are now looking at brain-computer interfacing (BCI), says Professor Christopher James, Chair in Healthcare Technology at the UK's University of Warwick.

"BCI is not science fiction, it really is science fact. It has been proved that it is possible," he said.

The big issue nowadays, he says, is trying to increase performance of BCIs in terms of their speed and accuracy.

"The performance at the moment maybe 60-70% and you need to make it 80-90% before it becomes really useful," Jones said.

Miranda is also looking to fine tune his system to make it more robust and user-friendly so that clinicians can handle it by themselves, he says.

But while the equipment may be complex and the task of rehabilitating lives an arduous one for everyone involved, the mission at the heart of it remains a simple one.

"The bottom line is: Can technology help creativity and if so how? And could it lead to a new kind of approach to music?" he said.