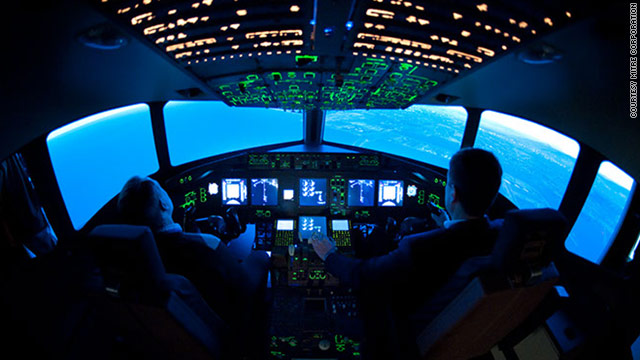 (CNN) -- He laughs about it now, but to hear former flight instructor Dave Domino describe his near-death experience flying over the bright lights of Chicago, it sounds anything but funny.

It was a cloudless, starry night in the mid-1970s when Domino was instructing another pilot during a cross-country flight in a small, single-propeller aircraft.

As they descended toward Midway Airport they peered down to pinpoint their destination amid the city's thousands of bright lights. Domino suddenly looked up to see another high-wing Cessna -- coming directly at him in the opposite direction.

"It was one of those situations where all you could do was gasp -- and then he was gone," Domino says. "There was no time to maneuver. No time to do any of that."

Shaken but unharmed, Domino radioed air traffic control. "'Did you have that guy on radar?'" Domino asked. "And he goes, 'Well ... uh... ,' kind of hemming and hawing." The encounter kept Domino awake the rest of the night; he never learned the reason behind the near collision.

The research is critical to NextGen, the Federal Aviation Administration's sweeping overhaul of the nation's air traffic system.

The GPS tracking technology is called ADS-B (automatic dependent surveillance-broadcast). It allows pilots to see a real-time cockpit display that shows the locations of their aircraft and any surrounding aircraft.

At its most basic, ADS-B works like this: The technology determines its plane's position by using signals from orbiting satellites. The plane broadcasts its position to other nearby aircraft and to ground-based relay stations, which send the information to the displays used by air traffic controllers.

"That near accident would never have occurred if I'd had a display of traffic on the airplane at the time," Domino says.

Better than radar, GPS can be used to track aircraft on the ground at airports, to prevent collisions and accidents during landing and takeoffs.

The FAA says GPS-enabled airport surface maps in the cockpit might have averted one of the deadliest U.S. air disasters of the past decade -- the August 2006 crash on takeoff of Comair Flight 191 which killed 49 people in Lexington, Kentucky.

A federal investigation blamed the Comair crash on pilots who mistakenly took off on a runway that was too short.

"Just knowing where you are in the airport goes a long way toward reducing the number of times you may inadvertently cross an active runway," Domino says.

Even amid the amazing technological achievements and wondrous capabilities of the 21st century, the most critical connection in the airline industry remains the same as it was at the birth of aviation: the human touch.

That's where Domino comes in. Armed with a degree from George Mason University in human factors engineering, Domino studies the way humans interact with machines.

It was one of those situations where all you could do was gasp.
--Dave Domino, principal systems engineer, MITRE Corporation

A classic task of the human factors engineer, Domino says, "is to ensure that information is being presented at the right time to a pilot and in the right form so that the human cognitive capabilities are not simply overwhelmed."

The question is, says Domino, "What should you put in front of a pilot and in what form should that information be?"

ADS-B represents a giant leap from the current pilot reliance on eyesight and air traffic control radio communication to achieve "situation awareness," a mental picture of all surrounding aircraft. With a screen in the cockpit, pilots now will be able to see the whole picture.

Situation awareness is a critical part of pilot decision-making, which helps pilots control their aircraft and plan their next moves.

'The human in the loop'

--NextGen expected to be fully implemented by 2025

As pilots interact with the flight simulator's technology, researchers record their actions for analysis. The simulator environment is designed for optimum realism, with live audio cues from role-playing air traffic controllers. A computer-generated display outside the cockpit window simulates what pilots see outside the airplane.

"You can PowerPoint somebody nearly to death trying to explain a new operations concept," says Domino. "But when you can sit down on the flight deck and actually demonstrate and put your hands on it and see it and feel it ... that's when people can develop a real understanding of what's going on."

The instruments should tell pilots exactly what they need to know when they need to know it, Domino says. For a pilot winging his way through a crowded air corridor over a busy city, getting the proper signal as soon as possible could save lives. The plan calls for pilots and air traffic controllers to share more information -- allowing them to better collaborate in avoiding mistakes.

The nation's air traffic controllers are heavily invested in the ADS-B rollout. "It's a great capability, but we've got some integration hurdles that we'll need to get over," says Melvin S. Davis of the National Air Traffic Controllers Association, who trains controllers on ADS-B.

"There are opportunities to design in prompts or cues in the system" to warn controllers about unreliable conditions and to allow them to exercise more caution, Davis says. "We've got to rethink the way we process information in our minds and the way we use it."

In the end, he says, "We've proven that the human in the loop is still in charge and pulls it all together."

Other NextGen cockpit technology will allow pilots and air traffic controllers an alternative to radio communication via a very sophisticated kind of "text message" system. The idea aims to cut confusion caused by misunderstood voice radio transmissions and to improve efficiency by "texting" routine information.

If texting while driving is unsafe, what about texting while flying? Domino says a lot of these messages will be pre-programmed and sent by pilots with the touch of a single button. But other messages might be "free text messages" that will require typing on cockpit keypads.

"Lengthy free-text messages would obviously require a lot of head-down time that may not be desirable," Domino says. "In certain phases of flight it would not be possible."

In effect, Domino's team will help determine the technology's maximum ability to make communication for pilots and controllers clearer and more efficient.

From flagmen to orbiting satellites

Aviation tracking and communication has come a long way in the 107 years since the Wright brothers first took flight.

By 1930, with the invention of radio communication, the first radio-equipped control tower began operating at the airport In Cleveland.

Routine radar tracking of civilian flights began in the 1950s. Believe it or not, controllers used plastic markers to track aircraft into the 1960s, when the markers were replaced by computers.

In the future, ADS-B has potential applications that extend beyond the airline business, including tracking rockets and other airborne vehicles.

MITRE principle systems engineer Rob Strain and other industry experts imagine the technology could open the door to three-foot-long flying drones that police would use to chase fugitives at a fraction of the cost of helicopters.

But despite the technological blue skies promised by ADS-B, hurdles remain -- including cost.

The FAA acknowledges the expense of installing ADS-B on planes poses a big challenge. The agency's original plan called for all airlines to pay for their own equipment -- which can run well into the six figures for just one commercial airliner.

But that plan showed signs of changing last month when the FAA announced it would pay $4.2 million to outfit 35 JetBlue aircraft with ADS-B to demonstrate its benefits.

ADS-B's full benefits won't be completely revealed until Domino and other developers unlock the technology's maximum potential -- located at that crucial juncture between machines and people.

Adding new components to the national airspace system involves teamwork across all areas of the industry, says Domino. "The need for collaboration between stakeholders is what brings us to success."

This is part two of a three-part series of reports surrounding the FAA's "NextGen" overhaul of the U.S. air traffic system. Check back on Friday for more on how NextGen will affect your flying safety.