The faces of Egypt's 'Revolution 2.0' 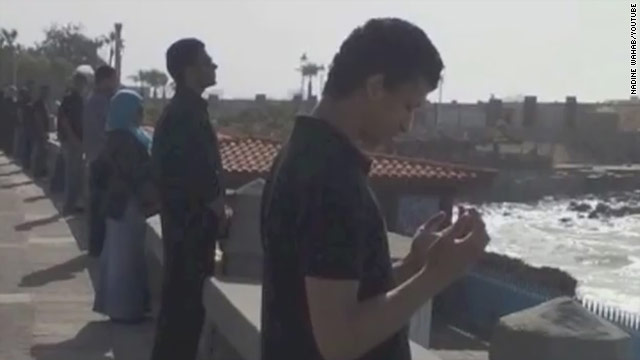 A now-famous Facebook page was organizing people in Egypt well before protests broke out in January.
STORY HIGHLIGHTS

(CNN) -- Dressed in black, they stood in silence on the banks of the Nile River with their backs turned to Egypt.

They had watched their homeland become a place of torture and repression. And now, in June 2010, they were making a statement.

Instructions for the protest were clearly disseminated on Facebook: Stand 5 feet apart, so as not to break Egyptian laws against public demonstration; be absolutely silent; no signs; wear black, as determined in an online vote; stand on the banks of the river or sea for one hour only, then walk away.

No one yet knew who had organized this protest against police brutality. There were five Facebook page administrators, tech-savvy activists who didn't really know each other. They had communicated almost exclusively over Google's e-mail system, which doesn't allow outsiders to trace communications back to a specific computer's IP address.

But the young, anonymous, internet-powered dissidents behind the "We Are All Khaled Said" Facebook page would surge in popularity over coming months. Eventually, they would be credited with helping spark the 18-day revolution that began on January 25 and toppled Egyptian President Hosni Mubarak, in power for as long as some of them had been alive.

In doing so, they would update our image of what it means to be a revolutionary: Perhaps it's no longer enough to wield slogans, baseball bats and gas masks; modern revolutions must be fueled, in part, by a bit of tech geekery, too.

Map: Tech and revolution in the region

The regime-changing wave of protests started after Tunisians successfully ousted their president in a popular uprising.

Egypt's then-nameless revolutionaries had created a Facebook "event" for January 25, like those for birthday parties or dinner gatherings.

They gave it an ominous name:

"The Day of the Revolution Against Torture, Poverty, Corruption and Unemployment."

More than 80,000 people clicked "yes" on the invite, indicating they would attend, according to Ahmed Saleh, one of the five administrators of the Facebook page.

"Who does a Facebook event for a revolution, you know?"

Salem RSVP'd a skeptical "maybe" on the Facebook page. And, like many others, including the event's organizers, he showed up in the streets of Cairo that Tuesday, doubtful that the event would amount to much.

Soon, though, he found himself in a throng of thousands shoving against police barricades "like a bowling ball," trying to create a way for protesters to get through.

In that moment, for him, a digital movement became real.

'Waiting for the internet'

Saleh learned that his country was a place of maddening torture, rape and imprisonment in unimaginably small spaces at age 10, when he opened one of his father's books.

Saleh's dad, a religious conservative, was a voracious reader -- and he kept a library in their home with all types of reading material, including material that was critical of the State.

"That was just shocking. And it continued to be inside me. It was internalized," Saleh said.

As he grew up, Saleh, now 32, was frustrated by how little he could learn about the world from Egypt's two state-run TV stations. Hungry to know more, he rejoiced at age 16 when the internet came into his home in Alexandria, Egypt. He stayed up night after night, reading international news and chatting with new friends in foreign countries.

"I was waiting for the internet to arrive in Egypt years before it arrived. Reading about it, I could see how much freedom there was (online), how much information you had. I was reading every book and every magazine talking about the internet," he said. "I was playing out in my head what websites I was going to visit."

Eventually, he would try to make Egypt more like this virtual world he loved.

The face of torture

The Egyptian man was allegedly beaten to death by police outside an internet café. He reportedly had possession of a video showing police selling illegal drugs.

Saleh and others were shocked. Soon they had created a Facebook page.

The name: "We Are All Khaled Said."

Google employee Wael Ghonim, working at night online from Dubai, headed this effort. Administering the site anonymously under the pseudonym "el shaheed," which is Arabic for "the martyr," he filled the page with news about police abuse and torture.

Ghonim, 30, rallied people around an issue that unified Egyptians. And by writing as a martyr, his words had the powerful impact of feeling like they came from beyond.

"It was someone who could be a brother, could be you, could be a friend who was brutally tortured," said Habib Haddad, a tech entrepreneur from Lebanon. "And he was talking to you -- not the admin."

Soon, there were Facebook-organized protests to show support for Khaled Said.

One of the first prominent demonstrations -- in which people stood along the banks of the Nile wearing black -- was held primarily in Alexandria, where Saleh grew up.

The idea didn't come from the Facebook page's five leaders, however.

It came from Facebook users, said Nadine Wahab, 34, another one of the five Facebook organizers who was a backup administrator, located in Washington.

"The flash mob was an idea that someone posted in the comments -- it wasn't any of ours," she said. "It really is a people's movement."

Saleh said it was amazing to see so many people lined up in silence, following all the rules posted on the "We Are All Khaled Said" Facebook page.

That June day felt like it was the start of something bigger, Wahab said.

But the world was not yet watching.

"The thing is, no one was really paying attention to Egypt," said Wahab, who is a press officer for a human rights group in the United States. "There were just a bunch of protesters. I remember sending press release after press release saying, 'Come on people, this is exciting! This is the start of a movement.'"

After the morning of January 25, the online organizers like to say Egypt's protest moved "offline."

Protest organizers led crowds of people into Cairo's poorer neighborhoods, shouting over loudspeakers for those without internet connections to come join people who had heard about the event online, organizers said.

Others pasted posters onto building walls.

"A lot of people who have never touched keyboards in their lives came out," Wahab said.

When the Egyptian government shut down the internet for five days during the protests, people on the streets turned to word of mouth, or they just looked out windows to see what was happening.

Perhaps the internet was a spark of the revolution. But much of the action was being lived out by real people in the real world.

On Thursday, January 27, the third day of protests in Egypt, Salem, the blogger, found himself surrounded by an angry mob of pro-government demonstrators -- some of whom were calling for him to be hanged, yelling that he was an anti-Egyptian "Zionist."

"It reminded me of zombie movies," he said. "You know that scene in a zombie movie when you've got the keys and you're trying to get the car to start and it won't start and they are swarming around you and trying to bite and eat you?

The online organizers in Egypt are quick to spread credit. No single person, group, Facebook page or political party planned this movement. It just happened, they said. Partly in response to the events in Tunisia. Partly by years and years of lingering economic, social and human rights problems.

And even within the blogging and social-media-activist community, there were several efforts. A group called the April 6 Youth Movement had been leading internet-driven protests since at least 2008. It also had a hand in rallying people in January.

Saleh, the young man who grew up yearning for an internet connection, said he was amazed at the degree to which the internet played a role in the movement.

In that world, if you could use tech tricks to maintain anonymity, you could mobilize more freely than in public, where you were likely to be watched by police. You could set up decoy events and change them on a moment's notice, you could spread your message to other countries, you could believe that another type of Egypt was possible.

And then you could bring it into reality.