Why does Google name its Android products after desserts? 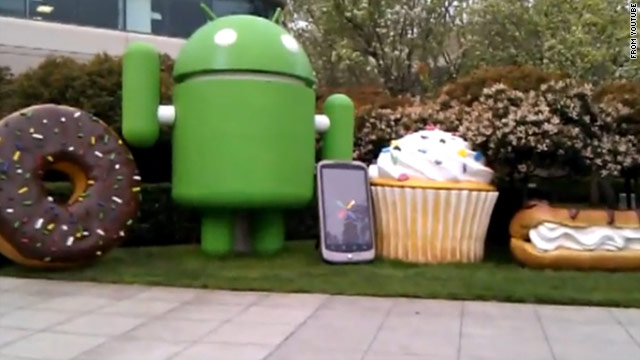 Google names its mobile operating systems after desserts and even creates statues of them, as this YouTube image shows.
STORY HIGHLIGHTS
RELATED TOPICS

(CNN) -- If you've been following tech news this week, you probably came across the term "Honeycomb," Google's unofficial name for its new Google Android operating system.

Honeycomb -- technically Android version 3.0 -- is significant because it's designed for tablet computers, not just smartphones.

But on a lighter note, what's up with that name?

As it turns out, all Android operating systems are named after desserts. And, just in case that wasn't nerdy enough for you, Google put these sugary names in alphabetical order.

On this week's Tech Check podcast, our team of writers places bets on the next Android OS name. My guess: Icee. (Ice cream is too obvious. Sorry, Doug Gross).

The next logical question about this is simple: Why?

"It's kind of like an internal team thing, and we prefer to be a little bit -- how should I say -- a bit inscrutable in the matter, I'll say," said Randall Sarafa, a Google spokesman. "The obvious thing is that, yeah, the Android platform releases, they go by dessert names and by alphabetical order for the most part."

"As far as the public knows, it started with Cupcake," Sarafa said.

"I have some ideas, but I don't actually know for sure," he said of the first two Android names. "That was, jeez, like four years ago."

A bit more geekery before you get on with your day: Google actually has built statues of these various Android desserts. They sit on the lawn at the company's headquarters in Mountain View, California.

There is a pretty surreal YouTube video of some guys wearing T-shirts and jeans (one has purple hair) and carting in the eclair statue.

"It's kind of a ridiculous thing to look at, right? They're huge," Sarafa said. "The gingerbread man is like 15 feet tall or something."

Of course, Google isn't the only hip-seeming tech company to employ quirky naming conventions. Apple's operating systems are named after cats, although there's some concern that they're running out of fearsome-sounding cat names:

Here's some more Android background, in case you're interested.

Android is Google's open-source alternative to Apple's iOS, which is used on iPhones and iPads. Google's mobile operating system is used on devices from the HTC Evo to the upcoming Xoom tablet computer from Motorola.

You can watch a demo of Honeycomb on YouTube, courtesy of PC Magazine. There's a promotional video with more close-ups, too.

"Rather than offering a radical departure from the vision introduced by Apple, the company's tablet-flavored version of its Android mobile operating system -- dubbed Honeycomb -- brings a handful of slick new user-interface features, designed for the more powerful hardware of a tablet. It also significantly streamlines the experience of installing apps on a tablet."