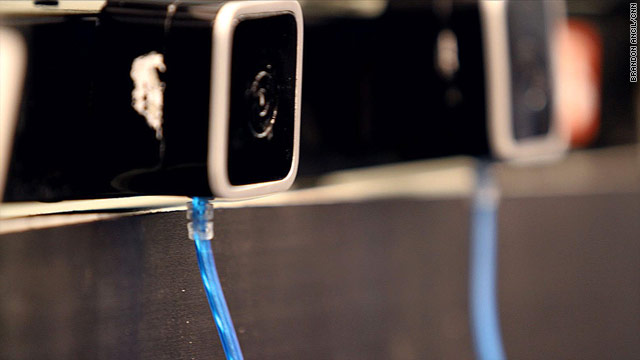 When electricity flows down these charger cords, blue lights move down the cord. Once a phone is charged, the lights go off.
STORY HIGHLIGHTS
RELATED TOPICS

(CNN) -- Here's one of electricity's dirty little secrets: You can't see it moving, so it's hard to know when you're wasting a bunch of it.

Think about the "vampire electronics" in your kitchen -- all of those blenders, coffee pots, toasters and toaster ovens that are sucking down power simply because they're plugged into an outlet.

These electronics gobble an estimated 5% to 10% of all the electricity used in U.S. homes, according to the Lawrence Berkeley National Laboratory.

But what if you could see your money going down the drain? Would visualizing power use help you save energy?

That's one possible effect of a new smartphone charger from Dexim.

When electricity is flowing down the charger's cord, blue lights travel down the cord, too, letting users see the energy that's needed to charge their smartphones. The lights zip down the cord more quickly when the phone is almost out of juice, since more electricity is needed.

Patrick Tarpey, a spokesman for the company, said this "electro-luminescent wire" is intended as a visual reminder for phone users so that they can see from across the room whether their phone is almost charged.

They'll know it's almost ready when the lights slow down, he said. That occurs when the phone is 65% charged. The charger shuts down completely and the light goes off when the charge is complete, he said.

"There's not really anything that's much like it out on the market," Tarpey said.

The charger, which only works with Apple devices such as the iPhone and iPod, is expected to be available for $40 in February. It will be sold on Amazon.com and on Dexim's website, Tarpey said.

Tarpey said the Dexim charger isn't intended to guilt consumers into using less energy. It's just meant as a neat visual indicator of power use. It could have that guilt effect, however.

BJ Fogg, director of the Persuasive Tech Lab at Stanford University, wrote in an e-mail to CNN that the charger "will influence some people (not all people) to recharge their phones differently."

Academic researchers have been looking at the idea of visualizing power and cutting down "vampire" electricity usage for some time.

For example, Swedish nonprofit research group Interactive Institute has developed a product it calls the Power-Aware Cord -- a surge protector that lights up when it's pulling power from the wall and gets brighter as more power is used. (TIME named this one of the best inventions of 2010.)

The group outlines its motivations in a 2005 academic paper (PDF):

"Electricity is both invisible and intangible. We can see, feel, hear and even smell its effects, but we can not really perceive it," the paper says. "As the effects of electricity (light, heat and so on) often are taken for granted in our domestic homes today, electricity becomes even more invisible.

"In order to support increased awareness in the area of consumer energy consumption, on a large scale in society as well as on the mundane level of the home, it is crucial that people learn about different amounts of energy used by the electric products in their everyday life.

"If this awareness is increased, people might gain control over their own local relationship to this invisible global resource. Ultimately this will lead them to question their energy behaviors."

"Maybe if you could actually see how much energy you're using, you wouldn't leave that PC running all night."