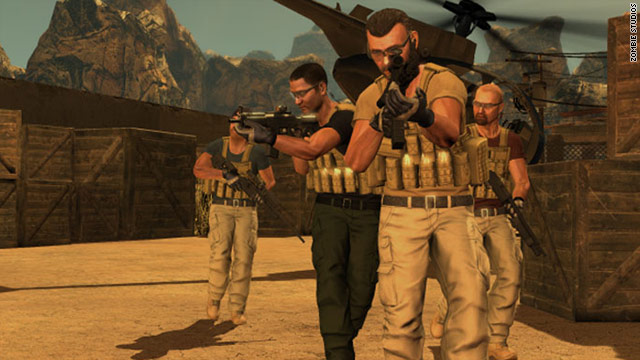 Now, Erik Prince, the founder of a controversial, real-world military group, is stepping into the virtual war zone with a new first-person shooter, "Blackwater."

Designed exclusively for Microsoft's Kinect for Xbox 360, "Blackwater" was developed by Zombie Studios and overseen by Prince, a former Navy SEAL.

The shooter is set in a fictional North African town overrun by warlords and opposing militia forces. Players enter the fray as team members of Blackwater, the mercenaries-for-hire company that Prince founded in 1997.

Featuring licensed real-world weapons, the game can be played with a traditional controller. But it has been crafted to take advantage of Kinect's motion controls. Gamers will be able to aim, crouch, and interact with the on-screen action using only body gestures and moves to take out enemies through a series of action-packed missions.

The game has already courted controversy, since Blackwater employees were linked to the deaths of numerous noncombatants and civilians in the Middle East while employed by the U.S. government.

Critics have complained about the game because Blackwater employees take on missions for money, while U.S. soldiers, the focal point of games like "Modern Warfare 3" and "Battlefield 3," fight for their country.

Following inquiries by Congress into Blackwater actions in Iraq and Afghanistan, including a shootout that led to the deaths of 17 Iraqis, Prince changed the company's name to Xe and, in 2009, resigned as CEO. He sold the company last year.

Although the game was created with the aid of former Blackwater employees, the gameplay does not put players in situations where civilians or noncombatants are targets.

The same cannot be said about "Modern Warfare 2," which earned more than $1 billion for Activision a couple of years ago. That fictional game featured an intense airport sequence in which players were forced to target innocent civilians as an undercover terrorist or risk having their cover blown and being executed.

Prince talked to CNN in an exclusive interview about the first shooter designed for Kinect, why he decided to enter the games business and what gadget he can't live without.

CNN: Why did you decide to enter the video game business?

Prince: Video games are an exciting medium. The creativity of design, the technology and the interaction represent the best of American innovation. My father was a brilliant inventor and businessman. He taught me to appreciate the opportunities that America offers to innovators. Working with the brilliant creators in this industry was a logical progression for me.

CNN: How involved were you in this game?

Prince: I set the overall vision and mission areas for this game. My guidelines were to be interactive, tactically correct, fun and expandable, meaning we can add additional missions and accessories to the game going forward.

CNN: What did you learn about how video games are made from this experience?

Prince: I now realize that the video game industry is very large and sophisticated, larger even than Hollywood in terms of volume. There is every aspect of specialization in the production of these games. Integrating physical motion into on-screen motion is an exciting new frontier for the industry.

CNN: How do you think the Blackwater brand will appeal to the gaming demographic?

Prince: I believe "Blackwater" will have a unique appeal to gamers, particularly on the Kinect platform. The physical, visual and virtual feel of participating in a mission brings a level of excitement and realism to the game that is hard to match. And frankly, it's fun. I think gamers will really enjoy playing the game.

CNN: Do you play games or have any background playing games? If so, what have you played lately?

Prince: I'm afraid I don't have time to play any games these days. I certainly played a lot when I was a kid and I know it helped develop my hand to eye coordination.

CNN: What are your thoughts on how video games have evolved over the years?

Prince: The video game industry is constantly evolving. The sheer creativity matched with cutting-edge technologies gives me the comfort that innovation is alive and well in America. And we can see the impact that the gaming industry is having on other entertainment media, as well as military training or flight simulation. It's a fascinating synthesis of ideas, technologies and platforms.

CNN: How does this game being a Blackwater experience differentiate it from franchises like "Call of Duty: Modern Warfare," "Medal of Honor" and "Battlefield"?

Prince: "Blackwater" on the Kinect system gets you up and moving. You'll have to act and react with something more than your thumbs. It is definitely the next step of progression into a truly interactive experience.

CNN: Why do you think simulation military shooters are so popular today? "Call of Duty" is the biggest game franchise of all time.

Prince: The popularity of simulation military shooters today is really no different from the popularity of playing soldier or cops-and-robbers when we were kids. Take timeless themes of courage, good vs. evil and war, and add today's technology and you get a very popular genre. We've taken the proven concept a step further with this game by having the player actually have to move their body to navigate the game.

CNN: What are your thoughts on the role games are playing in training in the military today?

Prince: Training for any difficult job is essential. Combat being the most difficult, it's the same reason the Navy started the Top Gun program during Vietnam, because they were losing way too many new pilots during air combat. Top Gun, by giving pilots realistic experiences simulating combat, drastically improved their performance and survivability. With video game simulations, DOD is providing many of the same sights/sounds and system overloading experiences to soldiers before they encounter a real firefight so they are prepared to make good decisions in the middle of all that stress.

CNN: Outside of work, what's a favorite piece of technology or gadget that you can't live without and why?

Prince: My kids would certainly comment on my use (or overuse) of a BlackBerry and iPad.