Grab a virtual margarita on Facebook with Jimmy Buffett 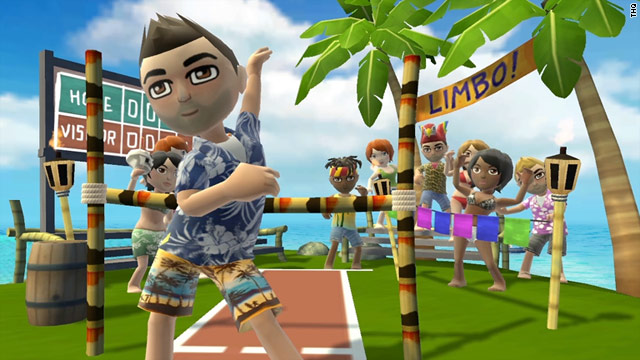 Editor's note: John Gaudiosi is the co-founder and editor-in-chief of Gamerlive.tv video syndication network. He's covered video games for hundreds of outlets over the past 20 years, from Forbes to The Hollywood Reporter, and produces 3-D television and online content for outlets like DirecTV and NVIDIA 3-D Vision Live.

(CNN) -- In this economy, it might be easier to grab a virtual margarita than a real one.

Developed by Exploding Barrel Games in partnership with THQ, the social game's graphics look more like those in Wii games than the Farmvilles of the world. It's likely to appeal to the more than 600,000 friends who Buffett, the singer who is known for island-y hits like "Margaritaville" and "Cheeseburger in Paradise," has on Facebook.

The game's players explore 3-D virtual islands filled with music, mini-games and, of course, margaritas. Gamers can jump on a boat and tour friends' islands or interact with classic characters from Buffett's songs and books, including Captain Tony and Joe Merchant. There are also social games like limbo and drunken party pirates to play with friends.

CNN sat down with Buffett at the E3 gaming conference this year to talk about the inspiration for this game and his video-game-playing habits.

The following is an edited transcript.

CNN: What are you doing at a video game conference?

Buffett: I think we need an oasis here in the middle of this. E3 is kind of a sensory overload, but Margaritaville is now a game. It's been a fun and an interesting project. It's been a long road to see it go to fruition.

CNN: Where did the idea for this video game come from?

Buffett: It came out of being fan-based. There were a lot of guys who were computer techs, engineers and gamers who were Parrot Heads, too. They came to me with this idea, so we followed it. To get into virtual games, I thought it was really cool. It's just basically fun.

CNN: How involved were you with the creation of this game?

Buffett: I said to these guys, "You know me .You do your version of me, and then I'll come in and write over some stuff." I obviously know this world, having written the stories, the books and the songs, so it's been a collaborative effort all the way up the line. It was a lot of fun, so I was working with gamers along the way.

CNN: How does your concert experience translate into a video game?

Buffett: You can take it home. (Laughs)

For a lucky almost 40 years, I've been on a stage singing "Margaritaville" and doing our show, which has become a cult following unto itself.

The great thing is, our demographics tend to be younger than older. They go the other way, because people have raised their children on this music. They're obviously gamers and social networkers, so when the idea came to me, it was much more attractive than trying to pursue it as a movie or as some kind of long-form entertainment. It's instant gratification. And the fun you're having at the show, you can really take home. That's what intrigued me.

CNN: Do you play video games?

Buffett: I didn't before, but I got into this game. This is the first time I've actually seen it and played it. It was so much fun to play it, but then I had to step back and look at how cool the graphics are in it. While we were designing the games, I used my children, who are 17- and 20-year-olds, as my test market.

CNN: What will players be able to do in "Margaritaville Online"?

Buffett: It's like a quest game. The first thing is that I said was, "It can't be anywhere else." Action is the name of the game.

At E3, we're in the middle of games filled with explosions and people's heads getting split open. I wanted to create something different. We're just getting in a boat and going to an island. It had to start that way.

When you get to the island, there's Captain Tony's Bar. Many things that come out of songs and stories are all in the island. That was the great part. I got to really create Margaritaville. After 40 years of a great song, it gets a new life as a great game.

CNN: Will you appear in the game as a character?

CNN: How do you see this game world evolving?

Buffett: I'm toying with ideas of taking it into the real world, where you could have a battle of the bands, or you could have people play in our band. That's the kind of involvement that I'm looking at in the future.

CNN: Will this game connect to your restaurants?

Buffett: Yes. I see people in the parking lot of our shows before they go to the real show sending everyone virtual margaritas. We're going to find a way that if you're buying virtual goods, then you can redeem them with real goods because we do have real-world Margaritaville restaurants and hotels and things. I want to combine these two worlds.

CNN: When will people be able to play "Margaritaville Online"?

Buffett: We're looking at ... October at the latest. When we finish this tour in Las Vegas on October 27, that would be a great kickoff month. But I'd like to get it out there a little sooner, so we're trying.

CNN: Will Parrot Heads be able to interact with you in this game?

Buffett: They can. (Laughs) But you won't see my real name. I'll sneak in. I already have my pseudonyms picked out, because I know they'll track me quick.