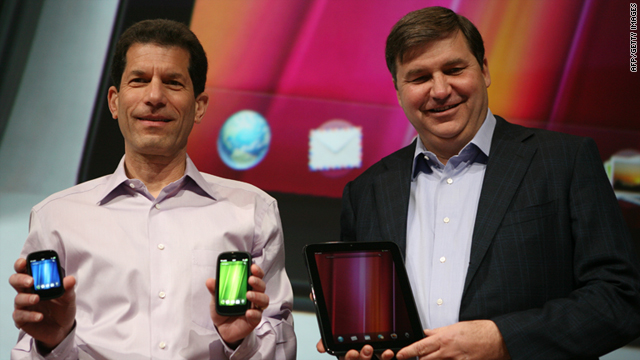 (CNN) -- As Hewlett-Packard manages a tectonic shift in its business, thrifty consumers can expect to shake down more deals on gadgets.

HP is set to replenish the supply of TouchPad tablets this week, spokeswoman Bryna Corcoran said in a statement on Sunday. The company began selling TouchPads for $99 and $149 last week in order to quickly shed inventory.

HP will also drop the price on the Pre3 smartphone to $75, which will not be sold in U.S. stores, a second spokeswoman wrote in an e-mail.

While the electronics giant has ceased production on the products, the "next batch" of TouchPads is being retrieved from a warehouse, Corcoran wrote. HP is seeing high demand for the bargain-priced tablets, which first retailed for $500 last month, and has struggled to keep its inventory alert system online.

Corcoran described the sudden demand for the TouchPad as "kind of bittersweet." In a statement, HP offered the following explanation for discontinuing the products: "WebOS devices have not gained enough traction with consumers."

While HP intends to stop making devices that run the company's downtrodden mobile operating system, Richard Kerris, an HP vice president, wrote in a message to developers on Friday saying his team plans to continue developing the software. HP CEO Leo Apotheker has said the company has explored licensing deals for webOS with other electronics manufacturers.

Bargain hunters are scheming on blogs and social media websites to share tips on how to score discounted TouchPads. The two TouchPad models have shot to the top spots on Amazon.com's list of best-selling electronics.

The fire sale has spread to Europe. The Pre3, which debuted in the UK and France less than a week ago, is now priced at $75, €59 or £49, the spokeswoman wrote in e-mails. It previously cost about $500 in Europe. The device will be unlocked, allowing people in the United States to connect to AT&T's or T-Mobile's networks.

HP will not allow customers to return the device, the spokeswoman wrote. The news was reported earlier by PCMag.com.

The Pre3 smartphone, with its slide-out keyboard, is the flagship in Palm's handset product line that HP acquired last year, and runs webOS, the same software used in the TouchPad.