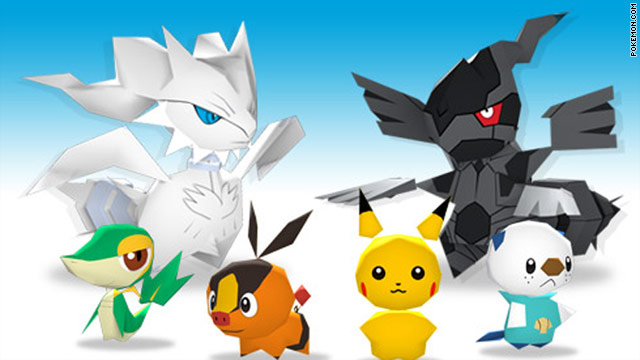 "Pokemon Rumble Blast," due out October 24, is one of the titles Nintendo hopes will reinvigorate flagging 3DS sales.
STORY HIGHLIGHTS
RELATED TOPICS

(CNN) -- Two days before the price of Nintendo's 3DS gaming system will drop, the gaming company is highlighting a set of hardware and software updates geared toward spurring popularity of the groundbreaking but slow-selling handheld device.

On September 9, a "Flame Red" version of the handheld console will become available in the United States, Nintendo of America President Reggie Fils-Aime told CNN on Tuesday.

And between now and the holiday season, the device, which lets users play 3-D games and video without using glasses, will see a host of release dates for titles including updates to the Mario, Pokemon, "Star Fox" and "Sonic the Hedgehog" franchises, he said.

"For us, this is really about reinvigorating the Nintendo 3DS business and making sure we're powering the business all through the holiday timeframe," he said.

The announcements, made official by Nintendo early Wednesday morning, come as part of a full-court press to turn around sales of the 3DS, which Nintendo's top officials have acknowledged have been disappointing since its release in March.

The device earned raves from gaming critics when it was introduced at the 2010 Electronic Entertainment Expo in Los Angeles.

But in financial statements released in April, the company reported that, after a strong opening, it had sold only about 3.6 million of the consoles.

Last week, Nintendo announced that after only five months, it was slashing the price of the 3DS from $249.99 to $169.99 in the United States. The new price goes into effect on Friday.

Acknowledging that that's a quick timeframe for such a dramatic price drop, Fils-Aime said it was important to make a move well in advance of the make-or-break holiday season.

"For us, the holiday timeframe is critically important," he said. "We've been in this video game business for 30-plus years. In order to have a strong holiday, you need to go into the holiday time period with strong momentum.

"That's what drove the decision to make the price change now -- let's drive the momentum in this late-summer, early-fall timeframe."

In other words, when Junior starts drawing up his list for Santa, Nintendo wants to make sure the 3DS is the gaming system on his mind.

They may be getting a little help in that regard. Sony has announced that its highly anticipated Playstation Vita handheld won't be hitting the market in the U.S. and Europe until next year.

Fils-Aime downplayed the influence of the Vita, which is set to sell for $249, on Nintendo's moves.

The "Flame Red" console will join the "Aqua Blue" and "Cosmo Black" models currently available in the United States and Europe. The red version went on sale in Japan last month.

Among the game-release dates Fils-Aime highlighted:

• Third-party titles "Sonic Generations," from Sega, "Skylanders," from Activision, and "James Noir's Hollywood Crimes" from Ubisoft are also expected between now and the holidays.

One of the factors many analysts feel has slowed sales of the 3DS has been the relative lack of titles for the system -- which obviously has required developers to work in a new format (Although it is backward-compatible with 2D games from the Nintendo DS).

Nintendo is banking on the flurry of new titles to help.

"We are in an enviable position of having these strong franchises and we bring new life to each of these franchises with the additional creative elements [of the 3DS]... ," Fils-Aime said.

"In the end, the hardware, yes, has to be a good value. But it's got to play the games that you want. We believe with the lineup that has been announced that we have the games that support the business."