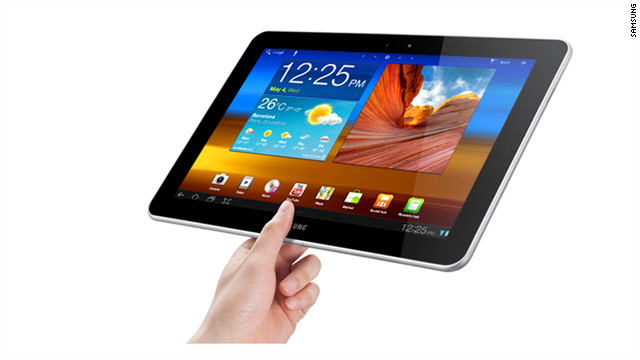 Samsung has been ordered to remove its Galaxy Tab 10.1 touchscreen tablet from stores in Europe.
STORY HIGHLIGHTS
RELATED TOPICS

(CNN) -- Apple won a significant victory on Tuesday in its campaign against Samsung Electronics over alleged intellectual-property infringements.

Samsung has been ordered to remove the Galaxy Tab 10.1, a touchscreen tablet computer that runs Google's Android software, from stores in Europe as part of an ongoing legal dispute between its creator and Apple, which makes the iPad.

The preliminary injunction from a Dusseldorf, Germany, district court extends to 26 countries that belong to the European Union, excluding the Netherlands. Certain laws in the Netherlands differ from those in the other nations, but Apple has filed a separate lawsuit in courts there, Florian Mueller, an analyst covering intellectual-property law, wrote on his blog.

"Preliminary injunctions in Germany take immediate effect, though an EU-wide one may require additional registrations in other countries," Mueller wrote. While the decision could be reversed, the ban on sales of the Galaxy Tab could last more than a year, he said.

The block only affects the Samsung tablet with a 10.1-inch touchscreen, not the various 7-inch versions. Apple CEO Steve Jobs has panned 7-inch tablets, calling them "tweeners," and saying, "We think the 10-inch screen size is the minimum screen size required to make great tablet apps."

An Apple spokeswoman confirmed that the company had received notice of the injunction ruling. A Samsung spokesman didn't immediately respond to a request for comment.

"It's no coincidence that Samsung's latest products look a lot like the iPhone and iPad, from the shape of the hardware to the user interface and even the packaging," Apple has said. "This kind of blatant copying is wrong, and we need to protect Apple's intellectual property when companies steal our ideas."

Apple requested a similar injunction against Samsung in an Australia federal court a week ago. As a result, Samsung postponed the launch of its Galaxy Tab 10.1 there.

"A Samsung Galaxy Tab 10.1 for the Australian market will be released in the near future," Samsung said in a statement. "Samsung will continue to actively defend and protect our intellectual property to ensure our continued innovation and growth in the mobile communication business."

Apple is also pursuing its infringement claims in other countries, including in U.S. courts.

In addition to the legal victory in Europe, Apple received more good news on Tuesday. The Cupertino, California, computer maker briefly surpassed Exxon Mobil in market capitalization to become the most valuable public company in the world.