Common courtesy at the coffeehouse 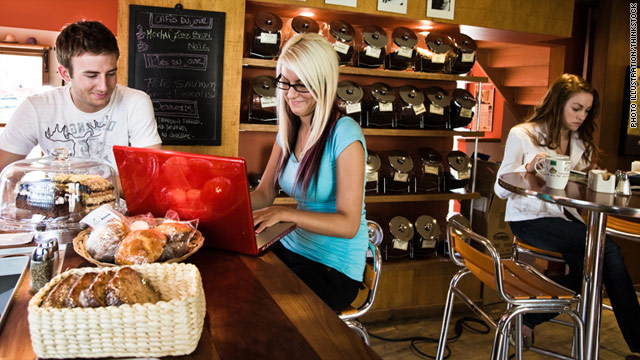 Cafes have become great places to boot up your laptop, hook into the Wi-Fi and get some work done -- but mind the rules.
STORY HIGHLIGHTS
RELATED TOPICS

Editor's note: Brenna Ehrlich and Andrea Bartz are the sarcastic brains behind humor blog and book Stuff Hipsters Hate. When they're not trolling Brooklyn for new material, Ehrlich works as an associate editor at Mashable.com, and Bartz is news editor at Psychology Today. Got a question about etiquette in the digital world? Contact them at netiquette@cnn.com.

At least, that's how we'd like to think of them. Nowadays, many have become havens for 13-year-olds growing hyper on blended sugar bombs and sad scenesters pretending to work on their screenplays while actually clicking around on Facebook.

As another heat wave belches its way across the States, cafes are becoming exceptionally attractive as a place to boot up your laptop, hook into the Wi-Fi and get some work done.

Here are some top courtesy tips for not offending the staff or fellow worker bees in a packed coffeehouse.

Unplug when you're juiced.

Outlets in a coffee shop are a hot commodity. If you can survive on your battery for a while, do so. Some poor soul with a four-year-old Dell and a battery that can't hold a charge will be ever-so-grateful.

If you're by yourself, plopping down at a two- or four-person table will aggravate the pairs and small groups that come after you. Usually there's at least one grand table with a smattering of solo laptoppers; head there.

Just don't sit directly next to anyone, or even on the same side where you can see their screen, if you can help it. Writing the next Great American Novel is difficult work with your neighbor gazing over your shoulder, so approach the table as you would a block of ATMs or a wall of urinals.

Yep, it's obvious, but an incredible number of rude-ies flout this rule: Listen to your music with headphones only. And don't let a YouTube video pop up and run.

If the music wafting from the establishment's speakers is too loud, feel free to ask the barista to dial it down a bit. Unless you just happen to have superhuman hearing, the jams are probably bugging other patrons, too.

Keep your cell on lockdown.

Yes, we head, zombie-like, to coffee shops in order to work on job apps or Facebook albums or awesome graphic screamo music videos over the energizing soundtrack of a bustling cafe. But while chitchat with other latte-sippers is one thing, jabbering away on your telephone is nothing but rude.

In fact, cell phone conversations, during which you can only hear a "halfalogue," are much more distracting than normal back-and-forths because they're so unpredictable -- instead of tuning the convo out, your brain picks up confusing little snippets and tries to figure them out, leading to decreased performance on cognitive tasks, according to research published in Psychological Science.

(What's that? You're the kind of person who can't do work over the din but enjoys the change of scenery that only a local coffee establishment can offer? Pull out your earbuds and allow us to introduce you to simplynoise.com. It just streams...white noise. You're welcome.)

If you do get a call, just ask another patron to watch your things while you duck into a corner for a quick convo. Easy.

A coffee shop owner's worst nightmare: The patron who shuffles in, orders a $1.50 coffee and then stays rooted at a table for five consecutive hours, occasionally returning to the counter to ask the barista for refills.

If you don't want the place to close, it's your civic duty to at least spring for a muffin after a few hours.

Your own laptop's included. Not that we're speaking from personal experience. Cough.