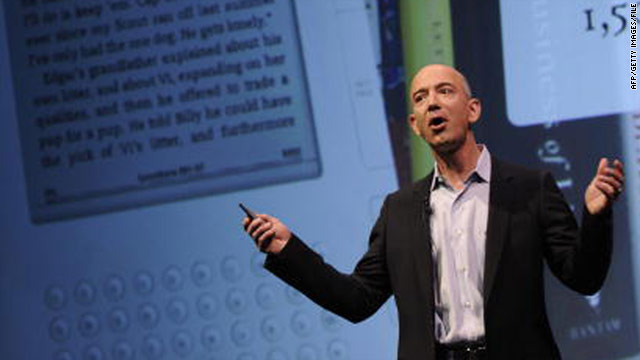 (CNN) -- Amazon, the online retailer that ignited demand for electronic readers with its Kindle, might be entering the increasingly crowded tablet computer market.

Citing unnamed sources, The Wall Street Journal reported Wednesday that Amazon will introduce a color touchscreen tablet before October that will compete with Apple's popular iPad and other similar devices.

People familiar with the product told the Journal that it will have a 9-inch screen and run on Google's Android operating system. It won't have a camera, they said.

The device will go beyond the Kindle in allowing customers to play movies, music and other content -- books, too -- downloaded from Amazon.com, the Journal reported. Amazon reportedly isn't developing the product itself, unlike the Kindle, but instead will outsource production to an Asian manufacturer.

Amazon did not immediately return a request for comment.

Rumors about Amazon making a tablet have been swirling for almost a year. Some reports have said the Seattle-based company is partnering with South Korean manufacturer Samsung, which will build the device.

Amazon CEO Jeff Bezos hasn't exactly doused the speculation. Asked by Consumer Reports in May about the possibility of Amazon launching a multipurpose tablet device, Bezos said to stay tuned.

Reaction was swift Wednesday afternoon in the blogosphere, which seemed to accept the Journal report as fact.

"The lack of a camera is disappointing, but it may be a sign that Amazon is positioning its tablet as more of a competitor to Barnes and Noble's wildly successful Nook Color, a hybrid tablet/e-reader that retails for just $250," wrote Devindra Hardawar in VentureBeat.

"The fall is going to be very interesting. There's a reason Apple wants to get another iPad out there before the end of the year," TechCrunch's MG Siegler wrote on his personal blog.

Wednesday's Journal report also said Amazon will also release two updated versions of its Kindle e-reader in the third quarter of this year: a touch-screen device and an improved but cheaper adaptation of the current Kindle.