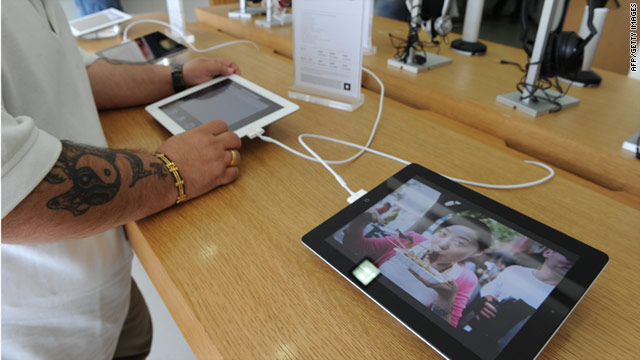 Apple is rumored to be working on a high-def update to the iPad 2, which is shown here.
STORY HIGHLIGHTS
RELATED TOPICS

Here's the latest: The company reportedly is working on a new iPad, due out later this year, that will have a higher-resolution screen.

Dubbed the "iPad HD" by a blog called This Is My Next, which is run by former editors from the respected tech site Engadget, the new iPad is said to be a "pro" device that could be used for high-end video editing and photography.

The iPad HD, which would have a screen with twice the resolution of the current model, will be introduced in September alongside new software that will cater do these higher-end applications, the blog says, citing unnamed sources.

Ars Technica, another tech site, says the rumor makes sense given the fact that Apple has been releasing high-resolution versions of tablet content.

"Apple started including pixel-doubled artwork in versions of iBooks for iPad some time ago. It recently added yet more 2048 x 1536 pixel artwork in iOS 5 betas for newer features like Twitter and Newsstand. So it seems a pretty safe bet that a future iPad will definitely use this resolution," that site writes.

The high-resolution screen could boost the price of the Apple's popular tablet computer, which is the best-selling on the market, says the Time blog Techland. Full disclosure: Time shares a parent company with CNN.

"The screen itself would be so expensive that it'd be impossible to hit the $500 starting point pegged to the consumer versions of the iPad," Techland says.

This is all conjecture, of course -- which is part of Apple culture these days. The conventional wisdom says Apple will hold some kind of product announcement in September, when a new iPhone and possibly an iPad could be unveiled.

Apple's second-generation iPad went on sale in March. The company faces a host of competing tablets -- most running Google's Android operating system -- but none have sold as well as the iPad.