'Civilization' gets social in moving from PC to Facebook 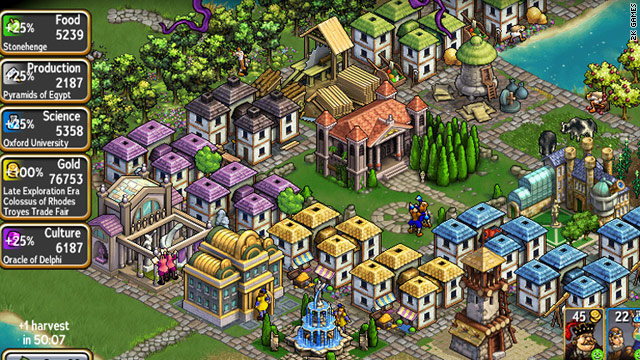 The goal of "Civilization" game is to build a nation from meager beginnings into a world power by any means necessary.
STORY HIGHLIGHTS
RELATED TOPICS

The result is "Civilization World" -- or "Civ World" for short -- and it's a more social, Facebook version of the global-domination game that has been addicting players since 1991. The new game, which launched Wednesday, also takes the power away from the individual player and forces you to cooperate with people you might not even know.

In this way, it comes off as something un-"Civ"-like. Because for the millions of people who have played a version of "Civilization" on their computer, taking to Facebook to tackle Meier's game may be jarring at first.

The goal of any "Civilization" game is to build a nation from meager beginnings into a world power by any means necessary -- scientific discoveries, economic development, military might -- while outmaneuvering other countries along the way.

In "Civilization World," the idea of world domination still exists, but players can no longer control their own destiny and must rely on others to band together for success. It is a mind shift for longtime fans of the series, and one that requires changing strategies on the fly.

Players only control one city-state throughout the game by managing how its citizens harvest resources for the common good. Citizens move from home to resource to drop-off point to increase overall production. How short their travel time is, where their home is located and how many similar citizens live nearby all affect their overall happiness.

"Civ World" is free, at least initially. Because it's a Facebook game, there are opportunities to purchase Civ Bucks, which can then be spent on acquiring additional resources. (The game plays just as well without spending any of your real money.)

Each resource is used in different ways. Science goes towards research, culture develops Great Persons cards, food increases your population and so on.

Alone, players can only accomplish so much. They will get quickly left behind unless they create or join up with existing civilizations.

In an interview with CNN.com, Meier said developers tried to re-imagine the game to involve hundreds of people playing together at once.

"What was really intriguing to us was being able to emphasize cooperative game play, which was something that really hadn't been a major part of 'Civilization' up to now," he said. "A lot of our design in 'Civ World' was taking advantage and using these opportunities for players to work together -- teamwork, communication, planning. Those are all the things that become really important to 'Civ World.'"

The pace of the game is slow and methodical. Resources are harvested en masse every hour. Battles take up to 10 hours to set up, and are conducted one unit at a time over many more hours.

Wonders are gained by using Great Person cards, which are obtained by having a high culture score. Armies are bought after accumulating massive amounts of gold. And all that doesn't even include the time it takes to plan your civilization's future with your comrades-in-arms.

"You need to vote if you are going to battle another civilization. You need to vote on adopting certain civics," said Tiffany Nagano, a producer for "Civ World." "Voting becomes a pretty central part for a lot of Civ-related activities."

Like many games on Facebook, the entire process is designed to encourage drop-in, drop-out play. This isn't a game that requires the micromanaging of the PC version.

Playing at different times in the day, Meier said, "fundamentally changes the mechanics of the game because if you are not there at the same time as other players, there needs to be ways of leaving messages, ways of communicating. Things have to happen at a pace where everybody can be included. So that fundamentally changes the pacing and the mechanisms of the game."

Players can also earn positions of power within their civilization, which provide bonuses and special skills that help the overall group.

So is it fun? Yes and no, depending on what you are expecting.

If you go into "Civ World" thinking it is just "Civilization" on Facebook, you are going to be disappointed with the lack of control over your own destiny. The long-held notion of "just one more turn" in a typical "Civ" game doesn't really apply here since turns, such as they are, can take hours. You often must wait for your partners to get back to you before you can take action.

However, if you like the idea of cooperating with others toward a common goal and are happy being a part of the puzzle instead of the entire solution, "Civ World" will be enjoyable and immersive.

In my game during beta testing, I concentrated on building up science and researching new discoveries. Others in my civilization focused on military and gold to help us win. It was thought-provoking, engaging, and not as time-consuming as the PC version.

While you can play with your Facebook pals, you can also join up with people you've never met and possibly make new friends. Unless, of course, they stand between you and world domination.